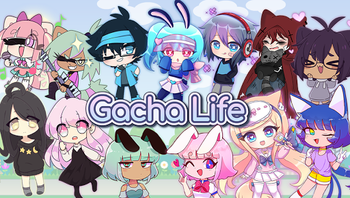 In Gacha Life, you can create and customize your own chibi characters, which you can set them up for a scene in the Studio mode, or take the role of one of them and interact with and befriend the NPCs in the Life mode. As for the "Gacha" part, you can spend Gacha gems on Gachas and earn gifts from them and gift them to the NPCs.

In other words, it's just a fun cutesy game with little meaning other than creating chibi characters and having fun with them.

, as well as the mobile version with extra features (such as online chat and roleplay) from App Store

A sequel known as Gacha Club was released on June 29, 2020, with more customization options and a Role-Playing Game mode replacing the friendship sim mode.