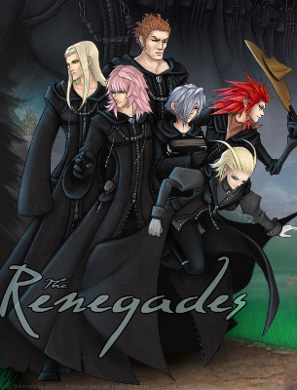 is a 104-chapter Kingdom Hearts fanfiction written by the users abby_sarajane, chigrima and silvestris, under the alias 'The Plot Bunny of Doom'.

The story begins shortly after the events of Chain of Memories. Vexen, brought back from the dead by his enemy card, revives the other Organization members in an attempt to have them punished by Xemnas for their failure. This plan is quickly derailed when the other Nobodies point out how he is just as guilty as they are.

Realizing that they have utterly screwed up, they run. Vexen, Marluxia, Axel, Larxene, Lexaeus and Zexion band together in a mad rush from world to world, trying to survive while hoping that their former comrades don't catch them. What they face includes swamps, deserts, malaria, snakes, the Big Apple, laudanum-induced hallucinations and sinking ships. Every time they think they're getting comfortable, they're forced to jump to another world. Making things worse is that the Organization eventually notices their presence and tries to hunt them down.

While the fic contains comedy, drama, horror and (in optional chapters) yaoi, it is mostly a character study on characters who got little development within the main games. Alliances are made, relationships form and dissolve, and there's the bickering you'd expect from a group of bad guys who hate each other's guts. The two pairings featured are Vexen/Marluxia and Zexion/Lexaeus, but the authors occasionally Ship Tease with Larxene/Lexaeus, Xaldin/Xigbar and others. All of these combine to form a potent mixture of

In total, the runaways have traveled through the Dark Forest (Snow White and the Seven Dwarfs), London, Agrabah (Aladdin), The Mountain where the Lights touch the Earth (Brother Bear), Twilight Town, New York City, the ruins from The Jungle Book, Havfruehavn (The Little Mermaid), Riverbend (Pocahontas), Reunion Inn (The Sword in the Stone), Land of Dragons (Mulan), Tremaine Mansion (Cinderella), The Wild West (Home on the Range and the non-Disney Spirit: Stallion of the Cimarron), Wonderland (Alice in Wonderland), Tortuga (Pirates of the Caribbean), Saber Manor (G-Force), Kingdom of Kuzco (The Emperor's New Groove), Suburbia (Bolt, Pixar movies), Hinterlands (The Nightmare Before Christmas), the circus from Dumbo, Sherwood Forest (Robin Hood), Beast's Castle (Beauty and the Beast), Foxes' Forest (The Fox and the Hound), Isle of Idra (Hercules), Pride Land (The Lion King), Mesozoica (Dinosaur), and Notre Dame (The Hunchback of Notre Dame).