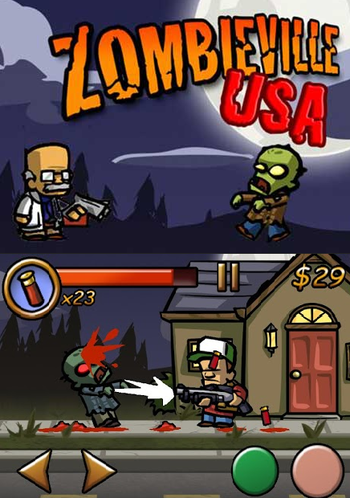 Zombieville USA is an arcade style Endless Game, created by Mika Mobile and available on iOS and Android devices. It received an HD Updated Re-release in 2010, and a sequel, simply named Zombieville USA 2 in 2011.
Advertisement:

The basic plot of the game is simple: kill zombies and loot houses to earn money and ammo, get upgrades to your weapons and refill health, repeat until dead or bored. The game features 7 playable characters, the Doctor note Heals slightly when looting houses, but cannot get crits with melee, the Ninja note extra speed and increased melee damage, finds money at a reduced rate, the S.W.A.T note Increased bullet damage, but weak and slow melee, The Survivor note no special ability, but no downsides, John Gore note Very low health, but finds lots of ammo, The Clown note low health, but finds lots of money, and the Foreman note increased damage with rocket launchers and the chainsaw, but cannot upgrade to flamethrower and laser.

Once the player chooses a character, he then enters the first level, a street full of zombies and houses. Zombies can either walk in from the ends of the level, or dig up through the sidewalk to spawn. Occasionally a vehicle, such as a sports car, bulldozer, or helicopter, will appear in the level, which can be ridden to speed through the level and destroy any zombies in the way. You can also rarely find NPC survivors who will attempt to help you through the hordes, but they tend to have a problem protecting themselves.