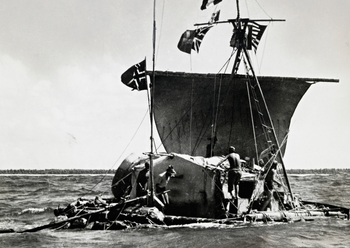 Kon-Tiki is a documentary film from 1951. It is Thor Heyerdahl's

account of his voyage in the summer of 1947 with five companions, in a raft, over 6,980 km (4,340 miles) of open ocean, from mainland South America to landfall in the islands of Polynesia.

At the time the history of the islands of the south Pacific, and specifically how they were settled, was a subject of intense academic debate. The dominant theory of that era was that the islands of Pacific were settled by people who set off from the Asian mainland and traveled eastward. Heyerdahl disagreed. He believed that the south Pacific was settled by people who set off from mainland South America and traveled westward. Heyerdahl contended that the famous moai statues of Easter Island resembled Incan statuary, and that Easter Island myths indicated that peoples from the Americas had settled the island.

In order to show that his theory was feasible, Heyerdahl and his crew constructed a boat using what would have been available to the ancient South Americans, namely, balsa wood tree trunks and rope. They set out on a voyage that lasted a little over three months, in which they were able to feed themselves from their stored supplies and the fish they caught. Little steering was required as the prevailing wind and ocean currents sent them right where they wanted to go. They made landfall on Raroia

While Heyerdahl showed that the voyage was feasible, and several other groups duplicated his feat, later research indicates that the original theory of Polynesia being settled in an eastward direction from the Asian mainland is correct. In particular, genetic evidence solidly backs the general outlines of Polynesian colonization originally set out on the basis of Polynesian linguistics.note Polynesian languages are clearly part of the Austronesian family, whose other members are mostly in Southeast Asia. Sure enough, Polynesian haplogroups are most closely related to ones in Southeast Asia. That being said, there is tantalizing but inconclusive evidence that Asian-descended Polynesians made the reverse journey at least once before 1492

, possibly accounting for Heyerdahl's observations and partially vindicating his theories.

A dramatic film of this voyage, also titled Kon-Tiki, was released in Norway in 2012.