Literature / Light and Dark: The Awakening of the Mage Knight

Are you a Knight of The Light? 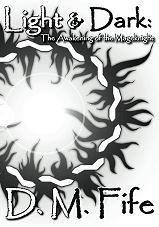 Danny Firoth is on the verge of beginning his final year in middle school. The only odd thing to happen on that fateful day is the appearance of new student in school, a beautiful girl named Sabrina Drake. Fascinated by not only her spellbinding looks, but her interest in a popular fantasy card game called Knights, Danny develops a school-age crush. He soon discovers that she is not a human but a drake and her dad is the real life inspiration for a Knights card! They are members of the Order of the Light, a knighthood that protects the world from Shadows and the forces of The Dark.

Seeing his potential, Danny is invited to the White Rock Academy of Illumination to train to become a Knight of the Light. There everyone eagerly awaits the return of the "Mage Knight" who led the Order to victory against the Shadows in ages past and whose return is supposed to mark the end of the war in the Light's favor. However, there are those within the order that would use such a figure to their own advantage. With the help of his friends, Danny must use everything he has learned to thwart the betrayal of someone within the Order of Light before a pricelss treasure is swept into the Eye Of Darkness.

Not to be confused with Mage Knight a miniatures wargame using collectible figures, created by Wiz Kids, Inc. Also do not confuse with the similarly titled Light and Dark The Adventures of Dark Yagami, which quite thankfully has nothing to do with this novel. This is a YA fantasy novel written by Daniel Fife.

Are these the Tropes of The Light?