Film / Siege of the Saxons 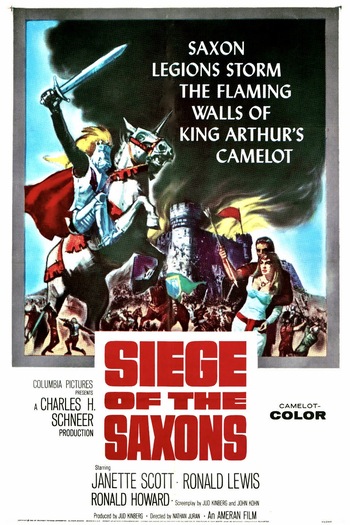 Siege of the Saxons is a 1963 British adventure film directed by Nathan H. Juran,note Known for The 7th Voyage of Sinbad and Attack of the 50-Foot Woman, among others loosely based on the King Arthur mythos but also incorporating aspects of the Robin Hood legend.

When Duke Edmund of Cornwall (Ronald Howard) betrays King Arthur (Mark Dignam) in favor of the Saxons and pins it on the outlaw Robert Marshall (Ronald Lewis), Robert flees Camelot with Arthur's daughter Katherine (Janette Scott), the rightful heir to the throne. Will they find Merlin (John Laurie) and discover a way to overthrow the usurper before they are captured or killed?

Siege of the Saxons provides examples of: