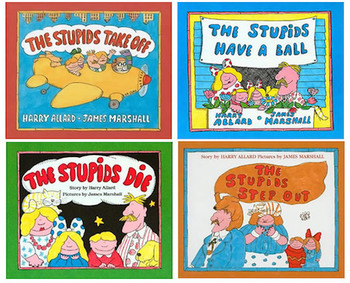 The Stupids are the title characters of a series of books written by Harry Allard and illustrated by James Marshall. It features an unusual family that is Exactly What It Says on the Tin in that they are stupid and get easily mixed up when performing tasks, to the point that the dog and cat are smarter than them. It first debuted in 1977 with The Stupids Step out and ended with The Stupids Take Off and four books in the series in 1989.
Advertisement:

The books were made into a film adaptation in 1996 directed by John Landis, starring Tom Arnold as the family's patriarch, Stanley Stupid, for which he won a Golden Raspberry Award for Worst Actor. The film was critically panned and was a Box Office Bomb.

Features examples of the following tropes: