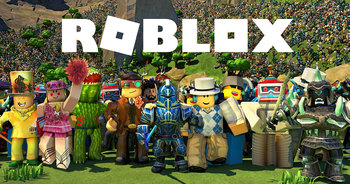 What will you build? note (Formerly IT'S FREEEE!)
"We're building a platform for a new generation. One that enables people to create and share experiences through play. Together, we are the architects of play."
— David Baszucki (aka Builderman), "The Story of Roblox

is not actually a video game, but a technology platform for developers to develop games onnote Blame the Brand Guidelines

. On Roblox, players can create their own games with Roblox Studio, bundled with manipulation of the 3D game environment, Lua scripting, GUI features, usermade and distributed assets, and pretty much any video game spec you can think of, and play other games created by other players. Because of Roblox's very versatile nature, just about anything is possible; machine guns, remote-controlled cars, on-demand meteor storms, 3D Mario-style adventures, explorations of the second dimension, and much, much more. While you can play Roblox games on PC, Mac, and mobile, you can only pop some on the Xbox One.

Additionally, players can customize their blocky trademark-style Lego-like avatar with items bought from the catalog, with Robux, earned from Premium subscription, monetizing your game if it's successful, or buying with real money, to play as in most games.

Roblox was first brought to life in 2006 by David Baszuki and Erik Casselnote though its concept surfaced as early as 2004 as "DynaBlocks" as an "online building toy" with its Built with LEGO aethestic that would define much of Roblox's history, building your world with Lego-like blocks, popping in some scripting for a bit more interactivity, and exploring games with your blocky Robloxian. When Roblox received an insurge of popularity around 2015, Roblox would go on to become more of a professional video game development software, not to mention helped by Developer Exchange, the ability to earn real money from your games, than a kiddy sandbox game Roblox started out as.

Roblox works and creators with their own pages:

What will you trope?:

open/close all folders
Roblox and its games in general
Specific games
Egg Hunts
Other events
Oof!