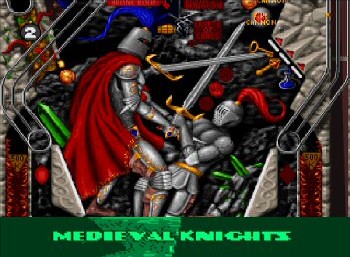 It's not just Epic, it's Extreme!
Advertisement:

Extreme Pinball is a pinball video game developed by Digital Extremes and Epic Megagames, and published by Electronic Arts for MS-DOS computers and the Sony PlayStation. It was the first game by Digital Extremes, though founder James Schmalz had previously created Silverball and Epic Pinball.

The game has the following tables:

Compared to Epic Megagames' earlier pinball titles, Extreme Pinball featured higher-resolution graphics and taller playfields. Unfortunately, the game failed to catch on; players found the tables sparse and dull, multiball locks the camera at the bottom of the playfield, and the dot-matrix display took up a fair amount of screen space, making the scrolling view claustrophobic as a result. Worse, the table view lagged slightly behind the ball, making it easy to lose track of the game, and the floaty physics prevents catching or trapping it.

The PlayStation version was released via Play Station Network in 2010.