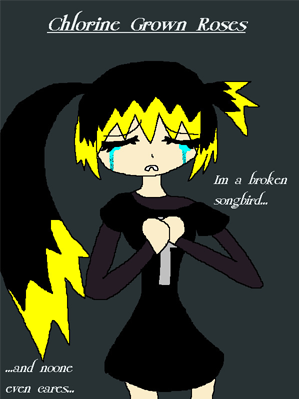 The cover on Fanfiction.net, in all its MS Paint glory.
Chlorine Grown Roses is a Free! fanfic written by NekoTenshi222 (formerly known as SonicXKimmy172) that was posted to DeviantArt and Fanfiction.net on December 22, 2015. It is complete, with 46 chapters having been posted. It can be found here

The story follows a fifteen-year-old orphan named Azusa Kimber Tachibana, the American-born cousin of Makoto Tachibana. After having lived in isolation in her mansion in the United States since her parents were murdered in her very home, she was sent a letter from said cousin with a plane ticket to Japan attached. From thereon, we see Azusa take to life in Iwatobi, which includes but is not limited to: fangirling over the swim team (before joining it herself); befriending the canon characters; throwing herself into a relationship with Rin Matsuoka (and later getting a crush on Haru); involving herself in a murder investigation; getting institutionalized; and having a run-in with the yakuza.

The fic began getting 'revisions' from SonicXKimmy172's friend named AkiTommichan starting from Chapter 7, who, in turn, has her own fanfiction, a Steven Universe fanfiction titled Morganite and a newer Black Butler one called Blackest of Nights. So far, the grammar has only gotten worse from the editing.

A great chapter-by-chapter critique of it done by the Tumblr blog character-critique-central (which is updated upon the upload of each new chapter) can be found here.