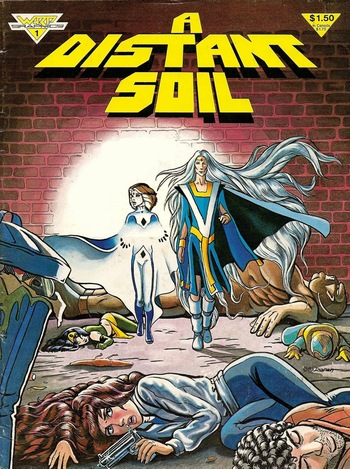 A Distant Soil is an epic comic book series by Colleen Doran. It is a combination of science fiction and fantasy, combining Arthurian elements with a space story about a highly advanced alien society, from a world called Ovanan. Ovanan is inhabited by immortal, androgynous, psychic beauties, and ruled by a corrupt council called the Hierarchy. The Hierarchy draws its power from a being called the Avatar, who is connected to what is called the Collective, and through it, every Ovanan mind. They control the Avatar, forcing him to kill or exile any children with power that could threaten the Hierarchy and the empire built and ruled by Ovanan.
Advertisement:

One Ovanan man, Aeren, was exiled by the current Avatar, Seren, for being a Disruptor, which is the opposite of the Avatar in that while the Avatar manipulates the flow of energy through the world around them, a Disruptor disrupts the flow of energy. This power can be used to kill with a touch, short out machinery, or unlock any lock. Aeren was allowed to live, and escaped to Earth, where he married a human woman and had several children. Only two survived.

Liana and Jason, 15 and 17, have powers they don't understand and can't control. They are locked up in an institute for study. Liana has epilepsy, and her seizures appear to be linked to her powers. Together, they escape the institute, but are quickly separated. Liana is confronted by an Ovanan man who introduces himself as Rieken, and his companion, a mortal named D'mer, from a world conquered by Ovanan.Rieken explains that Liana has the powers of an Avatar, and as such is interfering with the current Avatar's ability to access and draw upon the power of the Collective. When Liana accidentally touched the Collective, the Hierarchy became aware of her existence, and sent a battleship, the Siovansin, to find and eliminate her. Rieken and D'mer are members of the Resistance, and want to overthrow the oppressive Hierarchy. They have come to Liana for help, and to protect her from the Hierarchy. She agrees to help, and Rieken and D'mer set off in search of more people to help them on their quest. Rieken is revealed to be the Avatar, Seren, who wishes to be free of the Hierarchy's control and remove them from power. He is keeping this a secret from his allies, believing they would not trust him if they knew.

Meanwhile, the Hierarchy has captured Jason, who is a Disruptor with a psychic link to his sister. He is tortured and nearly killed by Sere, a sadistic pedophile and a member of the Hierarchy. The Hierarchy believes him to be dead, and he is rescued by the Resistance, who recruit him and convince him to help them kill the Avatar. They are unaware that their leader, Rieken, is really the Avatar.

Rieken, D'mer, Liana, and their allies are taken aboard the Siovansin, the humans passing as new members of Rieken's household. Beys, a member of the Resistance, seduces Jason during his initiation, and uses crystals containing information about the mission to control his mind and actions. The two groups rush towards confrontation, with Liana and Jason caught in the middle.

Since 2009 the comic has been published for free on line. All of the original pages have been posted and new material is now appearing. It can be read here