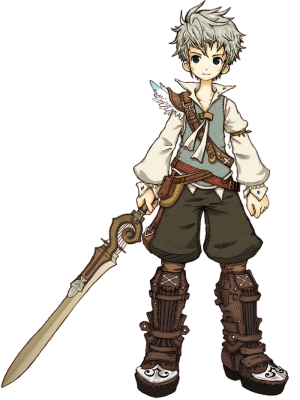 The main protagonist. A young thief in Ritardando stealing high-priced bread from the main city to the poor children in the sewers. He naturally dislikes the job because it also makes those he robs into victims, but doesn't seem to find an alternative for getting bread until he realizes that Count Waltz, the leader of Forte, is putting higher taxes on bread but barely prices mineral powder. He sets off to Forte to consult Waltz to see if there's any possibility to make the taxes even, but he later finds that Waltz isn't all too obliged...

His main weapon during battle is a standard longsword. 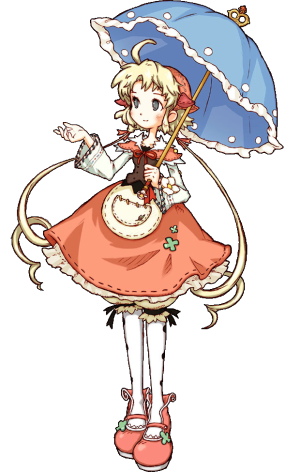 An Ill Girl from Tenuto who sells floral powder in Ritardando, as well as a magic user. Her illness has an impact on her life by slowly shortening it as time goes on, and because of her illness, many people tend to stay away from her, thinking that her illness is linked to her magic, and is contagious. She is confronted by Frédéric François Chopin at one night, and believes that since he can use magic, he is destined to die as well, allowing her to relate to him more easily and even become friends. Like Allegretto, she heads to Forte to see if there is a possibility to make taxing on mineral powder even, so she could sell floral power more easily.

Her weapon of choice is a Parasol of Pain. 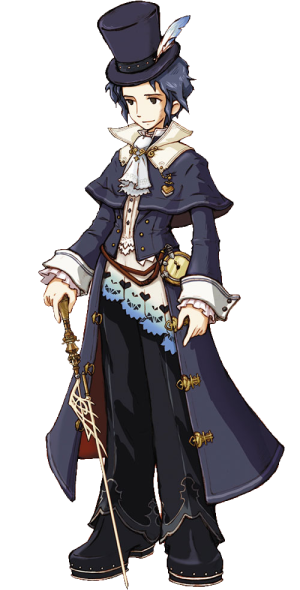 The Tritagonist of the game. A composer, a pianist, and a bit of a romanticist born in a village in Warsaw. His fame through the piano rose at an early age, and his skills even allowed him to perform a rondo at the age of 14. During the Polish November 1830 Uprising, he settled in Paris and made a living as a composer and a pianist teacher. He also became acquainted with George Sand, a woman with an odd, masculine appearance, and the two have been close friends to his death.

On his deathbed, where he lies as the illness, supposedly tuberculosis, continues to weaken his little life left, he begins to dream a world of fantasy, with swords, magic, and monsters all in harmony with the plays of music. After confronting Polka, who also has a disease that shortens her life, in the dream's world, he decides to support her, as well as the party, while he tries to understand the true nature of his dream.

His weapon of choice is a conductor's baton. There is also power within his melodies! 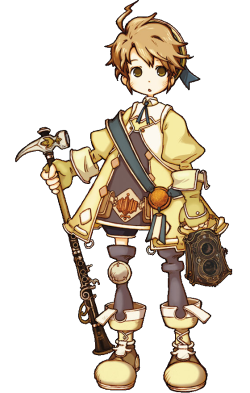 A naive young boy residing with Allegretto and the rest of the kids in Ritardando. He hangs around with Allegretto and helps him with taking the bread for the kids, but mostly does whatever he can to assist him, and goes with him on the journey to Forte. He holds an old camera that was handed to him by someone, and claims that it's a memeto.

His weapon is a hybrid of a gun and a hammer, capable of giving a fast rise to the Echo Counter. 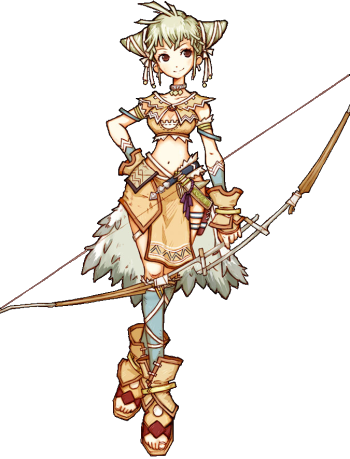 A woman living in the outskirts, tending to her goats while enjoying her life outside. She decides to join the group in hopes of breaking to Count Waltz the side-effects of mineral powder overdose, in order to prevent humans and other creatures from turning into monsters.

Her weapons are of bows and arrows capable of doing high damage at long range. At short range, she'll go for Good Old Fisticuffs. 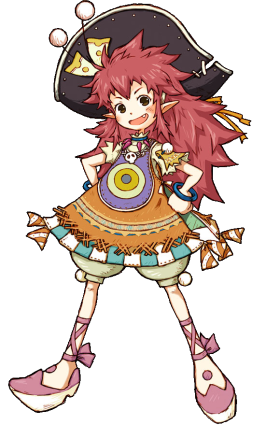 The spunky Guardian of the Agogo Forest. Salsa was surrounded by the nature since her birth, and, with her sister March, decided to protect the Agogos while they resided in the Agogo Village. She storms to Forte earlier on to have the Count halt all excavations for mineral power on Mt. Rock, which happens to be near the Agogo Forest, only to reveal her status as a guardian and get thrown into the dungeon. Saved by the party, she travels with them to stop the Count before his plans get out of hand.

Her weapons are chakrams, with hers being Sun Chakrams, in contrast to March's Moon Chakrams. 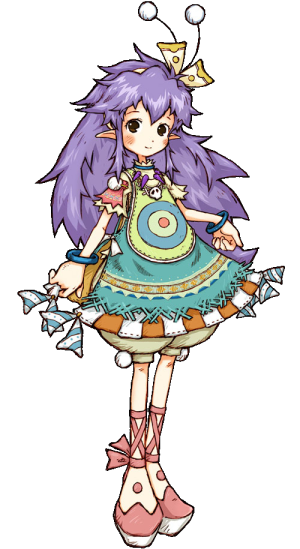 The second Guardian of the Agogo Forest and twin sister to Salsa. She holds a calm and kind demeanor, in contrast to her twin. She first meets the party by tending to Polka's and Frederic's wounds from the first encounter against Fugue, and asks to give her sister's favorite hat once they meet her. After Fugue's failed attempt to get the glowing Agogos, she joins the group for the same reasons as Salsa.

She shares most of her tropes with Salsa because they are twins. 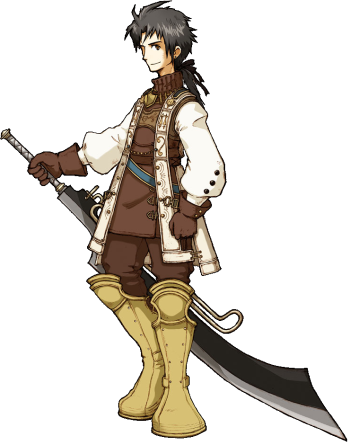 The Leader of Andantino, an anti-government group located in Andante. A serious person but not quiet to give orders, Jazz forms the resistance in order to usurp Count Waltz on his harsh laws while being backed by Baroque. He assists the party when they realize that Waltz is far from any reason to continue as the leader of Forte.

His weapon of choice is a broadsword, capable of dealing two hits per swing and having the Echo Gauge rise by 2.

A top lieutenant of Andantino and ally with Jazz. She, along with Falsetto, go with Jazz during some special missions, and joins the party after they encounter the Guardian of the Agogo Forest, Salsa. She leaves the party after Rondo severly wounds her and leaves her to her death, but can return to life in the Bonus Dungeon Mysterious Unison.

She uses Royal Rapiers in battle and can use some healing Skills. 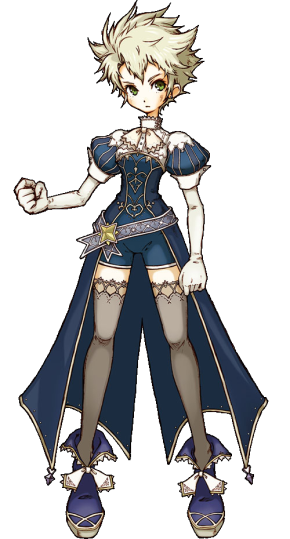 Another top lieutenant in Andantino like Claves. Kind and tough in nature, and loyal to her leader. She also partakes in missions that directly involve Forte and Count Waltz to stop him from excavating mineral powder. She joins the party after meeting with the Guardian of the Agogo forest.

Her weapon of choice is a pair of knuckles, and can build up Echos at an above-average rate. 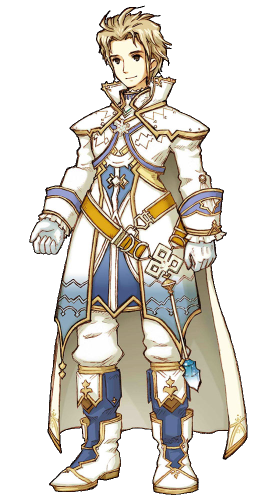 The Prince of Baroque and involved in its war with Forte. He often has trouble making the best decisions for his country despite trying his hardest. In the PS3 version, he and Serenade are both playable and they join the party after the battle with Count Waltz.

His weapon of choice is a shield and a mace, though they look pretty small in comparison. 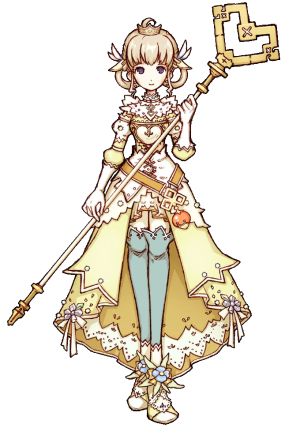 Princess of Baroque and Crescendo's fiancée. A graceful and refined woman who does her best to support Crescendo and his country despite being another spy for Forte.

She wields staves, and has long-range Skills, but can only build up Echoes at a short-range distance. 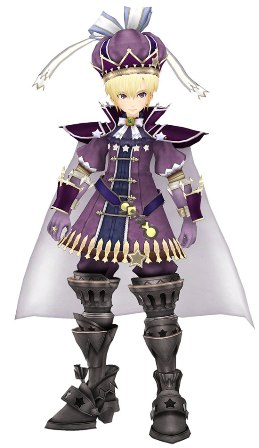 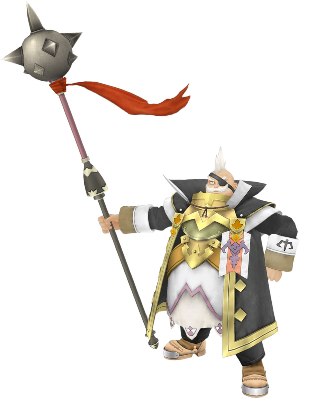 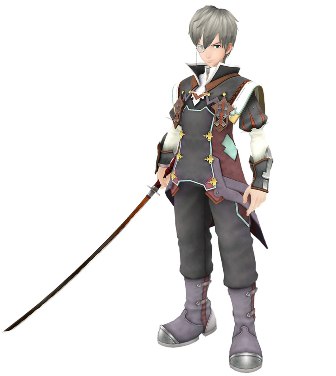 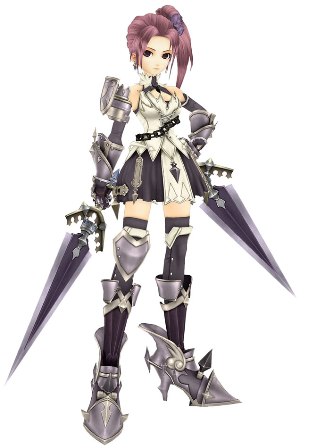