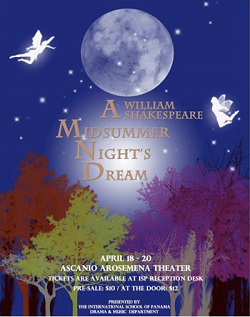 "This is the silliest thing I've ever seen."
If we actors have offended you, just think of it this way and everything will be all right—you were asleep when you saw these visions, and this silly and pathetic story was no more real than a dream.
— Puck
Advertisement:

An adaptation of William Shakespeare's A Midsummer Night's Dream by the theatre department of the International School of Panama. It keeps the plot of the original, that of a Love Dodecahedron tampered with and fixed by a band of fairies. Rather than the original Elizabethan dialogue, it used a contemporary English version without modernising the setting or situations - opting instead to keep the time period ambiguous and a deliberate Anachronism Stew.

Directed by Arturo Wong and produced by Alida de Paredes.

Also featured the talent (in order of appearance) of:

With an appearance by Elisa Angerer as soloist for the opening and closing numbers.

Now available as a picture book at [1]

A DVD of the third night's performance runs to 2:03:50 from overture to end of credits (it cuts out the intermission, the bows, and the first blackout).