Literature / The Fable of the Dragon-Tyrant

Silly sketches aside, this dragon would be a Cosmic Horror Story in the making anywhere else.
"We all know that this man had some irresponsible ideas, but his writings were quite entertaining and perhaps we should be grateful to the dragon for making possible the interesting genre of dragon-bashing literature which reveals so much about the culture of angst!"
The Fable of the Dragon-Tyrant

is a short story by Nick Bostrom serving to
Advertisement:
deconstruct society's views on aging and death.

Once upon a time, a tyrannical dragon demanded thousands of human sacrifices per day from a kingdom to appease it. Many have tried to slay the dragon, and all have failed, owing to its impenetrable scales. The people submitted to the horror, forced to feed the dragon. Time marched on, and as feudalism became industrialism, the dragon-tyrant lived on and continued to eat and grow. However, as the nation entered the information age, scientists riding the wave of exponential growth invented a material so sharp, it could pierce the dragon's scales. However, the citizens had grown complacent, accepting the dragon as inevitable and essential to the human experience. Some had even come to see it as natural beauty. As the scientists and engineers realized the weight of their discovery, they must trek the arduous path of, someday, using it to slay the dragon against all social pressure.

into an animated YouTube video for his biological immortality advocacy campaign. 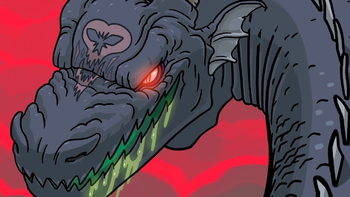 Now do you believe death is an Eldritch Abomination or what?
Stories about aging have traditionally focused on the need for graceful accommodation. The recommended solution to diminishing vigor and impending death was resignation coupled with an effort to achieve closure in practical affairs and personal relationships. Given that nothing could be done to prevent or retard aging, this focus made sense. Rather than fretting about the inevitable, one could aim for peace of mind.
Today, we face a different situation. While we still lack effective and acceptable means for slowing the aging process, we can identify research directions that might lead to the development of such means in the foreseeable future. "Deathist" stories and ideologies, which counsel passive acceptance, are no longer harmless sources of consolation. They are fatal barriers to urgently needed action.

Alternative Title(s): The Fable Of The Dragon Tyrant