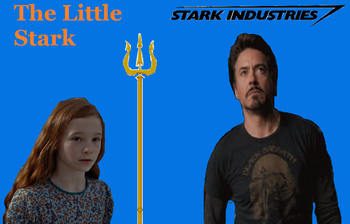 The Little Stark by Moon Witch '96

is a crossover between the Disney films and the Marvel Cinematic Universe, with a particular focus on Iron Man and The Little Mermaid (1989).

Relocating the kingdom of Atlantia to the present day, the film opens when an eight-year-old Ariel wanders into Ursula's domain by accident, resulting in Ursula turning Ariel into a human as a punishment rather than as a 'gift', with Ariel only just getting to the surface before she drowns. Ariel is subsequently rescued by Tony Stark (pre-Iron Man), who swiftly forms such a close bond with her that he arranges to become her legal guardian even before he learns the full details about her true history, and the storyline continues to explore Ariel’s impact on Tony in particular.

This fic can be read here

The Little Stark contains examples of: