Film / Secret Beyond the Door 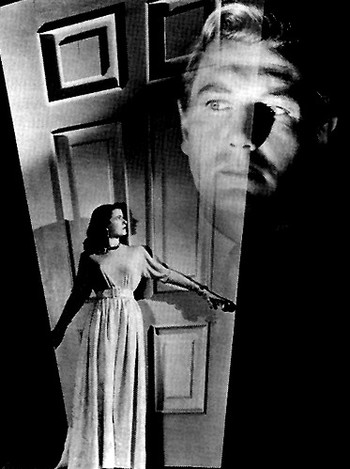 Secret Beyond the Door is a 1948 Film Noir thriller directed by Fritz Lang, starring Joan Bennett and Michael Redgrave.

World-weary heiress Celia Barrett (Bennett) impulsively marries a stranger, architect Mark Lamphere (Redgrave). The newlyweds have a blissful honeymoon until a harmless prank by Celia (locking Mark out of her bedroom) evokes a strange response from Mark. He leaves her in the middle of the night - apparently in response to an urgent business telegram - but Celia soon learns that there was no telegram.

Her worries are temporarily alleviated when Mark invites her to join him at the Lamphere family home, but his inexplicable mood swings continue and make her unsure of whether she has married wisely. To add to her concerns, Celia finds out that Mark already has a son from a previous marriage, that the last wife died under Mark's care, and that people suspect Mark of marrying Celia to bail him out of his precarious financial position.

Things only become worse once she learns that Mark likes to "collect" rooms where murders have been committed by recreating them from their original material. There are seven of these rooms, of which Mark is happy to exhibit six. But he insists on keeping the seventh permanently locked. Celia begins to fear that the seventh room contains a dangerous secret from her husband's past that he daren't reveal...