Film / Lust for a Vampire 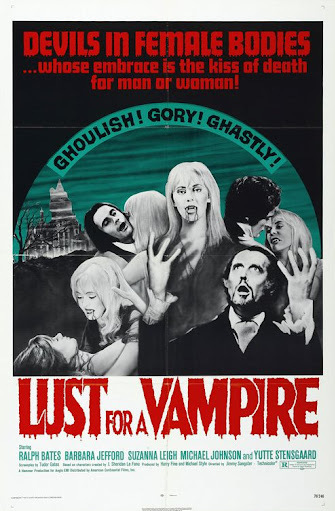 In the year 1830, Count and Countess Karnstein conduct a Satanic ritual to resurrect their daughter Carmilla (Stensgaard). Later, she enrolls as a new student in a finishing school run by Miss Simpson under the alias Mircalla Herritzen.

Meanwhile, Richard LeStrange (Johnson) makes his way into the school after an encounter with a few of the students and takes an interest in Mircalla.

Not long after Mircalla's enrollment, however, things go south quickly when one of the girls disappears. When she is found dead, it is assumed to have been an illness. However, the school dance teacher Jenny Playfair (Leigh) suspects something else is going on, and the Karnsteins are connected to this.

The second in the Karnstein trilogy, film was produced after The Vampire Lovers and would be followed by Twins of Evil.

Lust for a Vampire gorges on the following examples: