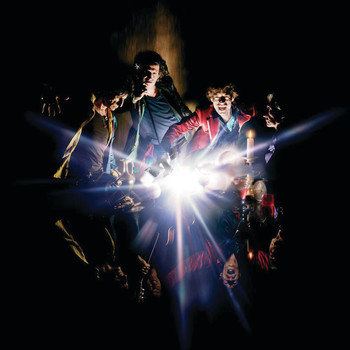 Oh No, Not You Again!
Advertisement:

A Bigger Bang is the twenty-second studio album (twenty-fourth American album) by The Rolling Stones, released in 2005. The follow-up to Bridges to Babylon from 1997, it is currently their most recent studio album primarily consisting of original material. It is also their second Double Album, the first being Exile on Main St..

The album was written by a rejuvenated Mick Jagger and Keith Richards in 2004. That year, Charlie Watts was diagnosed with throat cancer and had to undergo radiotherapy. This was a major cause of the rejuvenation, as well as the improvement of the relationship between Jagger and Richards. Luckily, Watts was able to get rid of his cancer. Meanwhile, Ronnie Wood was busy on his solo work and ended up appearing on only 10 out of 16 tracks.

Upon release, it was greeted with generally favourable reviews and hit number 2 and 3 in the UK and US charts respectively. However, there were strong criticism on the length of the album.