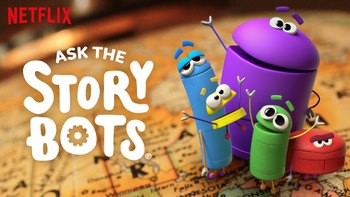 From left to right: Bang, Bing, Bo, Beep, and Boop.
Ask the StoryBots is a Netflix-original series and adaptation of the StoryBots brand released in 2016.
Advertisement:

The show is set inside a computer and features StoryBot Answer Team 341B, made up of Beep, Bing, Bang, Boop, and Bo. The job of StoryBots is to answer questions for children about various topics. Given the stumper questions, Team 341B head out to the “Outer World”, meeting others to help answer the question.

The series features guest appearances by various celebrities, such as "Weird Al" Yankovic, Garfunkel and Oates, and Snoop Dogg.

A companion series, StoryBots Super Songs, was also released at the same time. This series features a single topic, with various songs that are about the topic.

2017 saw the release of a standalone Christmas special, “A StoryBots Christmas”. In 2018, the series was renewed for a second season. A third season released for August 2019, and the show was fully acquired by Netflix in May 2019 as its own property. 2021 had another standalone special, "A StoryBots Space Adventure".

Ask the StoryBots provides examples of: