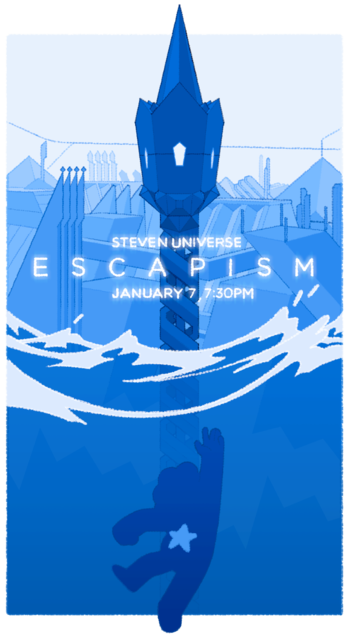 Stevonnie has been locked up in a tower after fusing at the Era 3 ball by the Diamonds, with the other Crystal Gems poofed. A look around the room reveals no options for escape, and Steven and Connie unfuse. Fortunately, Connie brought along a snack bar in her pocket for just this eventuality, and they split it. Connie's attempt to use her cell phone gives Steven the idea of using his Psychic Powers to call for backup from Earth, so he goes to sleep as Connie watches over him. However, when Steven manages to reach Earth in the mental space, he finds to his frustration that he's stuck in the body of a Watermelon Steven, instead of just contacting Bismuth directly as he'd planned. As he tries to reach Beach City, he has to navigate a civil war between two factions of Watermelon Stevens, and his determination to build a raft and sail away accidentally ends the conflict as he departs. After his raft is sunk by a storm and a watermelon shark, he's found by Lion, who recognizes him and takes him to where Bismuth and Greg are working on rebuilding his house. Steven finally manages to communicate the need for backup by writing it in the sand before his watermelon body expires. Waking up back on Homeworld, Steven finds Connie has fallen asleep, and admits that the only option left for now is to wait.