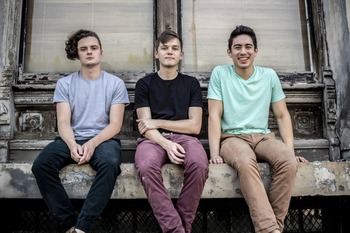 From left to right: Luke Davis, Ross Monteith, Calvin Langman.
"I got that love, little love that you leave me
While you fade away
Inside my heart is a drum that’s beating
For you every single day"
— "While You Fade Away"
Advertisement:

The Happy Fits are an Indie Pop band from New Jersey composed of three members: Calvin Langman (Cello and Lead Vocals), Ross Monteith (Lead Guitar), and Luke Davis (Drums). The band is unique in that, rather than having a bass player, they have a cellist.

The Happy Fits have released two albums, Concentrate and What Could Be Better. They have also released an EP titled Awfully Apeelin'.

Their first single, “While You Fade Away”, reached #5 on Spotify’s Top 50 Viral USA Chart the first week of its release.