Main Characters in one or both seasons

The leader of the Ewok tribe living at the Bright Tree Village, Princess Kneesaa and Asha's father, widowed.

Master Logray is the medicine man of Bright Tree village, said to be "over 200 years old". He is not as hard on the youngsters as Chief Chirpa, trusts them, advises them and forgives them.

Princess Kneesaa's cousin and one of the young, aspiring warriors of the tribe. Known as the Ewok who steals the speeder bike in Return of the Jedi. In the animated series, he is slightly older than his friends (anywhere between 16 and 20 in human age) and given a somewhat more serious appearance that is Played for Laughs, yet staying true to his impulsiveness from the movie. Reduced to a couple of non-speaking cameos in the second season. 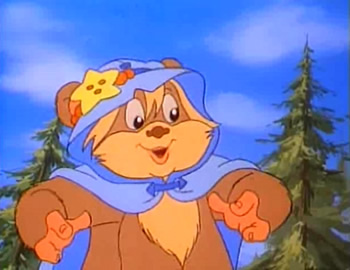 Malani is Teebo's younger sister, who came of age (got a hood) in the first episode of the series. About 6-8 years old in human age at the beginning of the series. She has a huge crush on Wicket and gets in trouble because of that in Rampage of the Phlogs and Malani The Warrior.

The Tulgah witch who is plotting against the Ewoks in four episodes of the first season, before eventually being killed and reemerging as a beautiful tree in Sunstar vs. Shadowstone. She is the long-term rival of Logray.

The leader of the Duloks, a rival species to the Ewoks.

Wife of King Gorneesh and the mother of his obnoxious children.

Not referred to by his name in the series for the first nine episodes, Umwak is the Dulok shaman. He is, however, clearly incapable of magic.

Dr. Raygar
A scientist in the employ of the Galactic Empire, he comes to Endor in search of the fabled Sunstar.
Admiral Kazz
A skeptical Imperial officer assisting Raygar.

Deej Warrick is the head of the Warrick family, husband to Shodu and father to Weechee, Willy, Wicket and Winda Warrick. In the second season of the show, he does not have a speaking role.

Shodu Warrick
Voiced in English by: Nonnie Griffin in the first season, Esther Scott in the second.
Voiced in Japanese by: Chinami Nishimura (DVD version)

Shodu Warrick is the wife of Deej Warrick and mother to Weechee, Willy, Wicket and Winda Warrick.

Weeche is Wicket's oldest brother, considered to be one of the toughest warriors in the village. He is presumably in his 20s.

The second oldest of the Warrick children, Willy is a chubby and clumsy young Ewok, presumably in his early 20s or late teens. He is called Widdle in Return of the Jedi and the made-for-TV films.

Asha is Kneesaa's older sister who was assumed to be dead until found in the first season's finale.

Bondo
Bondo is the ringleader of the travelling Jindas. He appears in Travelling Jindas and Curse of the Jindas.
Chuhka-Trok
Chuhka-Trok, otherwise a notable character in Caravan of Courage, makes a cameo for one episode, Asha. He is the Ewok forestkeeper/lumberjack.
Mring-Mring
Mring-Mring is a Gupin, who appears in two episodes- - To Save Deej and Land of Gupins. In the later, he becomes the king of Gupins.
PD- 28
An Imperial service droid who befriends the Ewoks.