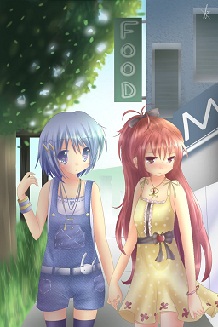 Imagine the world of Puella Magi Madoka Magica, only without the Magical Girls, without the Witches, and without the Incubators, a world where the characters could live out their lives normally. Sounds nice, unless your name happens to be Kyoko Sakura, a delinquent girl without a home, without a family, and without a future, who simply exists from one ill-gotten meal to the next and has little hope of finding anything better. That is, until she attempts a grab-and-run on some rich girl with short blue hair...

is a Slice of Life AU fanfic by Angel0wonder

that centers around relationship between the spunky but heartbroken Sayaka Miki and the rude-and-crude Kyoko Sakura, when the latter moves in with the former. But what sets it apart from other stories with similar concepts is the characterization: everyone is kept almost perfectly in character with their canon portrayals, and without the threat of the original plot hanging over their heads, they're given the space they need to develop their personalities naturally and work out their problems while finding new ones.