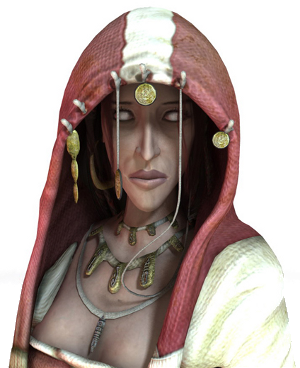 Voiced By: Zoe Wanamaker (Fable II, Fable III, Fable: The Journey)
And so it begins...

Theresa is the older sister of the Hero of Oakvale who, at the start of Fable I, is kidnapped by Jack of Blades and left to die in the woods after having her eyes slashed. For years, the Hero thinks she is dead, but eventually finds out she has been living with Bandits while developing her powerful psychic abilities. She is kidnapped again by Jack of Blades, and at the end, the Hero can either kill her and gain great power or let her live.

Her next chronological appearance is in Fable II, which takes place 500 years later. She is the one who directs Sparrow and his/her sister to the music box that eventually gets Sparrow's sister killed by Lord Lucien. She then spends the rest of the game (and most of Sparrow's life) guiding or outright manipulating Sparrow's life to the point where Sparrow can kill Lord Lucien but Theresa can keep the magical Spire that Lucien has been building.

She appears again in Fable III, acting as an adviser for the son/daughter of Sparrow as they try to overthrow their tyrannical brother King Logan and repel the invasion of the Crawler, a role she also played for Logan.

She makes her fourth and seemingly final appearance in Fable: The Journey, recruiting Gabriel to escort her across Albion to the Spire in order to stop the Corruption from consuming the land. 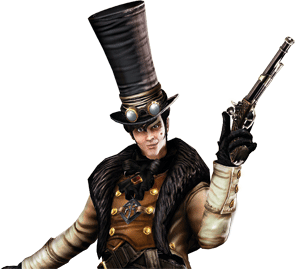 Voiced By: Stephen Fry
Admiring my weapon, are you? The Dragon Stomper .48... only six were ever made for a lucky few...well, not that lucky; I've killed four of them.

Reaver is the Hero of Skill with amazing gun abilities. He has eternal youth, which he gets from annually sacrificing the youth of others to the Shadow Court in Wraithmarsh. He is excessively vain and very trigger happy, as well as being Faux Affably Evil.

While part of the Hero party in Fable II, he plays a more directly villainous role in Fable III.

The Mayor of Bowerstone. In Fable I, the player can choose either to marry her or expose her for murdering her sister Amanda so she could become Mayor in the first place.

Werewolf-like enemies. They first appear in Darkwood and are later more prevalent in Witchwood. Survivors of Balverine attacks sometimes become Balverines themselves. Balverines come in standard versions and souped-up White Balverines that are much more though and dangerous.

Semi-organized criminals who live outside of towns and villages, and survive through pillaging, murdering, and thieving. They form the bulk of the human enemies you fight in the game. Fable I also has assassins as Elite Mooks, and Fable II has highwaymen filling the same role. In Fable III they're gone from Albion, having been eliminated by the military in-between the events of II and III, though they're replaced by "mercenaries," deserters from Logan's army.

Minions were bred in the Old Kingdom to be brutal and merciless killing machines. In Fable I, they serve as Jack of Blades' enforcers and become the main enemies for the later half of the game. Minions are divided into two categories: "Wardogs" that are rust-colored, vaguely jackal-like and fight with double-bladed red swords, and "Dreadwings" that are blue, silver and black, vaguely bird-like and can use magic.

Trolls are large and powerful creatures whose body composition vary depending on what environment they live in. They come in several variants, earth, rock, swamp, forest, ice and a mentioned-only platinum troll that became extinct by the time of the Old Kingdom. Trolls are reportedly extinct in Albion by the time of Fable III after an organized effort by Logan and the Albion military to hunt them down.

The Undead, as they're called in Fable I, and "Hollow Men" in Fable II and III, are fallen warriors who inhabit haunted places like Lychfield Graveyard, Grey House, or Wraithmarsh.