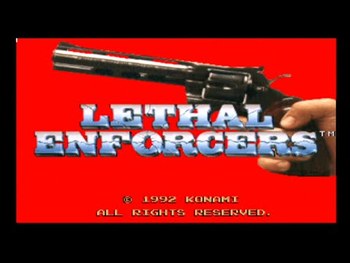 Lethal Enforcers is a 1992 Light Gun Game by Konami in which you are a police officer trying to take out criminals and terrorists. Shooting the bad guys will increase your rank, which is needed to get through the stages, but killing any innocent bystanders or police officers in the process will reduce your rank instead. There are five missions to complete in the game, each ending with a Boss Battle. The Bank Robbery, in which you must stop bank robbers from escaping and stealing the money, Chinatown Assault, in which you must battle The Triads and the Tongs as well as Chinese knife-wielding triads that have overrun Chinatown, The Hijack, in which you must prevent a general and his group of terrorists from taking a plane and escaping, The Drug Dealers, where you must stop the bad guys from selling drugs to innocent people, and The Chemical Plant, where you must stop terrorists from sabotaging a chemical plant to poison the water supply.

Among the light gun games that filled the arcades, Lethal Enforcers stood out as the first to use Digitized Sprites, specifically based on photographs of live actors and locales, giving the game a photorealistic (if pixelated) appearance. Combined with violent gameplay, like the similar use in Mortal Kombat (albeit without the famous blood and gore), this resulted in controversy.

In 1994, Konami released a sequel, Lethal Enforcers II: Gun Fighters (called Lethal Enforcers II: The Western in Japan). While the previous game was set in modern times, this game changes the setting to The Wild West. The gameplay is the same, only now you fight outlaws in Old West settings such as a saloon and a stagecoach holdup.

Home ports of both games were released for the Sega Genesis, Sega CD and Super Nintendo Entertainment System (first game only) bundled with the Justifier light gun. These were followed by a Compilation Rerelease for the PlayStation.

There is also a spin-off series called Police 911, also a sequel to the first game and is set in Japan. In these games, you race through each stage, clearing out enemies in the High-Speed Battle in order to reach the Cat-and-Mouse Boss stage, while using a Time Crisis-style cover system to avoid enemy gunfire. You are tasked to tracking down an international Yakuza group named Gokudou-kai.

Lethal Enforcers 3 was released in 2005 for arcades only, and plays completely different from its predecessors (but similar to the Police 911 spinoff). This is because it is actually the localization of Seigi no Hero ("Heroes of Justice"), the Spiritual Successor to the Police 911 spinoff. The game plays like a mix between a gun game and a racing game; you and an opponent race through each stage, clearing out enemies in order to reach the goal before the other player, while using a Time Crisis-style cover system to avoid enemy gunfire.

This second game contains examples of:

This third game contains examples of: