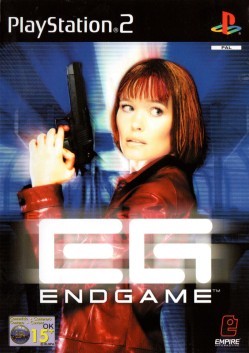 The future is being overwhelmed by virtual reality, young and poor, old and rich utilize it for emulating their dreams. It is August 14th 2020 and EuroDream Technologies has just made its VirtualWorldTomorrow update and shares have been skyrocketed. An illegal AI, Octavian, knows how to stop the update, but needs a human. Enter the 20-something Jade Cornell, a woman who has known a man named Tyler. Tyler knew the story from the truth, but EuroDream found him, captured him, and he's held hostage in a chateau in Switzerland. It's up to her to rescue him.

Endgame (stylized as ENDGAME) is a obscure Lightgun Game developed by Cunning Developments, known for their Pro Pinball series and published by Empire Interactive, released on May 31st 2002, exclusively for the PlayStation 2. Based on the Time Crisis formula, players have to reload by taking cover and they cannot attack while in cover. While being Empire's first and only go into lightgun gaming, it was criticized for its lackluster length of the story mode, the difficulty of the main game, and naturally, the cutscenes, which haven't aged particularly well.