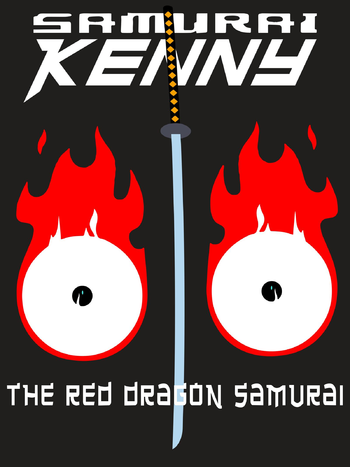 "…Gotta get back…back to the past…Samurai Jack. I've finally returned to the past and defeated Aku. But, I still feared for the future. Though he's gone, his shadow still remains. Though I will not be around, I will not let the nightmare return. With a simple goal, the Sword was passed down to eldest child of the eldest child. To be passed down throughout the times. So that if Aku does comes back, there's hope. I've placed my faith in him, and those around him. His name is Kenny Kurosawa… the Red Dragon Samurai."
—Jack's Opening Narration

is a crossover fanfic between High School D×D and Samurai Jack written by Cowboy Alchemist. It follows the story of Kenny Kurosawa, an 18-year-old half-American/half-Japanese student of Kouh Academy as he unlocks his destiny, getting a harem along the way.

Samurai Jack has finally returned to the past and defeated Aku. Thousands of years later, a high school student named Kenny Kurosawa dies one night. But on that night, a mysterious sword appears before him. Reborn as a Devil by Rias Gremory; Kenny will face the dangers and perils of his new life. Will he be able to protect his loved ones and stop the evils waiting for him?