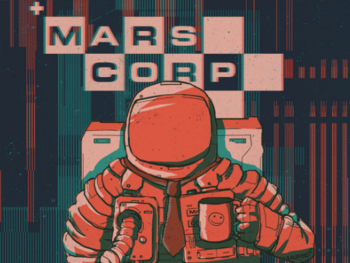 "There are gonna be some changes around here, Jim. Oh yes, lots of changes. Mark my words."
—E. L. Hob during her first day on Mars

MarsCorp is a science fiction/comedy podcast about a dysfunctional human colony on Mars. The protagonist is pragmatic Earthling E. L. Hob, a new supervisor and Only Sane Employee tasked with curing an extreme case of Incompetence, Inc..

Season 1 was released in 2016 in twelve weekly instalments, followed by Halloween and Christmas specials. Since then there has been a great deal of additional content released both publicly and on the Definitely Human Patreon

. A full second season is expected sometime in 2020.