Characters / The Demon Girl Next Door

A list of characters from the manga series The Demon Girl Next Door (Machikado Mazoku) and its Animated Adaptation. Beware of unmarked spoilers, especially if you are only familiar with the anime. 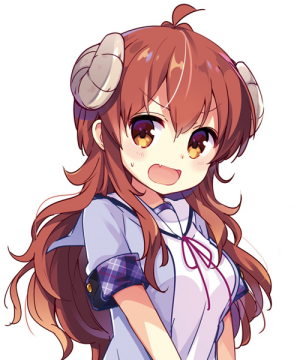 Novice demon. Wears her heart on her tail.
One of the two main characters of the story, along with her rival/friend Momo. A run-of-the-mill high school student, one morning she woke from a dream of her ancestor telling her to "awaken", and found she'd grown curly horns and a long demonic tail overnight. Her life would never be the same.

Yuko was extremely frail and unlucky since birth as a result of inheriting most of her family's demonic powers, and being proportionally affected more severely by the curse of the Light Clan as a result. She has little memory of her childhood due to her early illness and has suppressed most of what she did manage to remember. She would have died if not for extraordinary sacrifices made on her behalf, and even after recovering enough to leave the hospital and return to a somewhat normal life after her younger sister was born, she still got sick or passed out on a near-daily basis, having to make frequent emergency room visits, until her demonic powers and features awoke. Although her endurance remarkably improved, she remained embarrassingly weak, struggling with anything more than a few kilograms.

As Yuko grew up in an extremely sheltered environment, she is bafflingly naive and gullible. She is fiercely protective of her family, and will do anything in her power to protect them, even if all she can do is stand in the way and be a human shield, or suffer misfortune in their place. 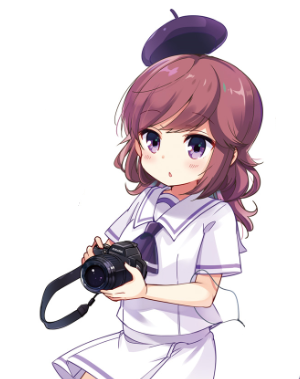 Devoted little sister.
Yuko's younger sister, still in elementary school. She is extremely smart for her age, and does better than her big sister at most things, largely due to Yuko having taken her share of the curse that affects their entire lineage. In spite of that, she sees enormous potential in Yuko, more so than Yuko sees in herself, and is totally devoted to helping her big sister Take Over the World. 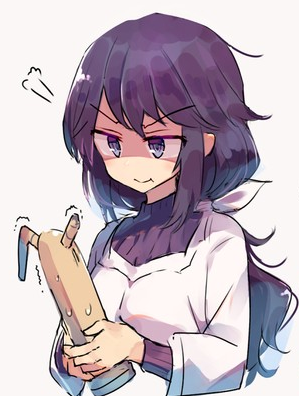 Forever a 20-something. Keeps Lilith in her place.
Mother of Yuko and Ryoko; she's had to raise them on her own ever since her husband was sealed into a box. She never had the heart to tell her daughters what had happened to him, until someone else affected by whatever transpired on that fateful night came to her seeking answers.

She comes off as something of a a ditz, and was admittedly very clumsy before she got married, but occasionally demonstrates impressive cunning. She hasn't aged a day since becoming her husband's vassal when they got married, and still looks to be in her early 20s despite being at least in her mid-30s. Maybe more. Maybe a lot more. Her past is largely unexplained and unknown. 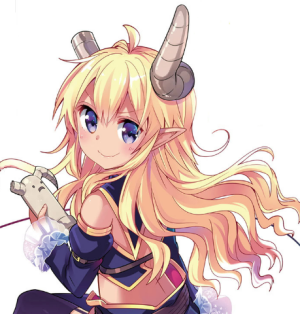 Hasn't won since the dawn of time.
She is an ancient demoness and the progenitor of the Dark Clan, sealed away millennia ago. Yuko and her father are direct descendants of Lilith, though by how many generations is never specified. (It's a lot. She lost count.)

For most of the time she was sealed away, she was barely conscious and was only occasionally able to reach out to the dreams of her descendants. For reasons unknown even to her, about ten years before the Present Day she regained her full consciousness, and the ability to perceive the outside world through the Evil God Statue that is a Yoshida family heirloom. After Yuko managed to break a part of her family's curse, Lilith became able to speak through the statue and even animate it to a small extent.

She becomes part friend, part mentor, and part grandmother to Yuko once they're able to communicate; first through Yuko's dreams, then directly once she can speak again. Although she is extremely petty and self-centered, she can hardly be called unequivocally evil. She genuinely cares for her family, and wants what's best for them (or at least, what she thinks is best for them). 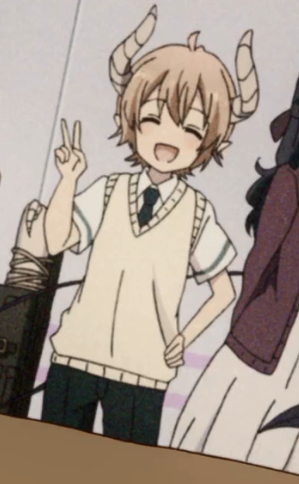 All that remains is an old photo and a box.
A demon of Mesopotamian heritage. Little is known of him, other than he was good at improvising and putting whatever he had on hand to good use, had a penchant for magically making himself look like a teenager, and was a devoted father who went to great lengths to save Yuko from the afflictions of their family curse.

He is trapped in a sealed space bound within the mandarin box in the Yoshida's apartment, which they use as a table and stool due to its magical protective coating. He is still watching over his family, encouraging and cheering them on, even if they don't know it. 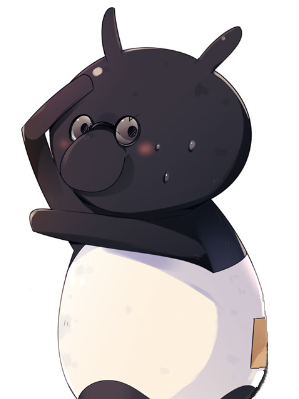 Walking upright is hard on his back.
As the owner of the Cafe Asura in the Tama Sakura Shopping District, Shirosawa is a hakutaku—a Chinese fantastic beast who is also the mythical origin of Chinese demonology—but appears as a talking tapir. He is a joyous folk, generally, but gets Amusing Injuries frequently due to being from a species that has no combat capability. 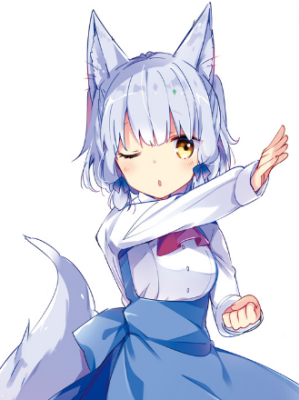 Tricksy fox. Can't read a mood.
Shirosawa's employee and the cook at the Cafe Asura, she is a huli jing

, a mischievous fox spirit and shapeshifter from Chinese folklore. Sakura left Lico in Shirosawa's care ten years ago back when he was just opening his cafe, as he mentioned he was looking for a decent cook, and she hasn't visibly aged since then. She's much older than she looks—at least 50, since she can take on a human form, but less than 100, as she only has one tail—and seems to have a Dark and Troubled Past of constantly being on the run from Magical Girls, or "mikos" as she calls them. 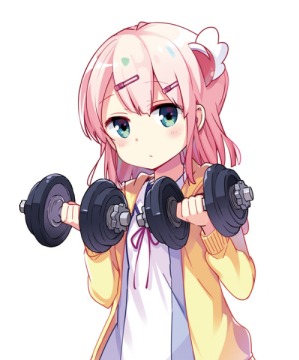 Retired magical girl. Far stronger than she looks.
A self-proclaimed retired Magical Girl with a Dark and Troubled Past, and the other main character of the series. Momo was adopted at a very young age by Sakura Chiyoda, likely because she sensed Momo's potential, and served as both a Big Sister Mom and a mentor in magic. She doesn't know her biological parents, and suspects she's an orphan.

Ten years before Present Day, shortly after Sakura left her in another town for safety, her sister disappeared from her life, and Momo spent many long years searching for Sakura's whereabouts. In the meanwhile, she apparently worked with other Magical Girls, and even saved the world with them once. During that time in active service, she saw enough very bad things to drive her to put away her wand and give up the Magical Girl life, though she still has her powers. They're handy sometimes.

When she first met (and was then attacked by) Yuko, she was merely interested in getting close to Yuko and her family for information concerning the whereabouts of her sister, and even attempted to stalk Yuko only to be thwarted by Sakura's barriers. However, while training her to use magic, Yuko revealed that she didn't have any of the malevolent feelings toward the world that Momo imagined demons would have, and Yuko just wanted everyone to get along well and be friends. In light of that, Momo genuinely tries to become her friend.

Their relationship grows deeper upon learning of their intertwined past, becoming more of a sisterly nature, though Yuko is still hung up on seeing Momo as a rival, driven to defeat her and earn her respect, and is too naive to see she has already won her love. 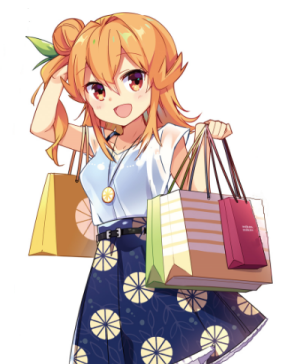 Extra girly magical girl.
An old friend of Momo and a fellow Magical Girl, though Mikan never completely gave it up.

She bore a curse for many years, after her father made an attempt to summon a demon that went terribly wrong as he didn't know what he was doing. The summoned demon, named Ugallu, took host in Mikan's heart, trying to fulfill its intended purpose by blindly lashing out at everyone and everything around her when it sensed her in distress. This curse was originally much worse, and nobody could even get close to her without being hurt, however, Sakura Chiyoda helped her out by using magic to suppress the curse a bit. She even devised a way to undo Mikan's curse, but was unable to carry out the plan she came up with due to...other factors. Since Sakura's battle with Ugallu already destroyed the factory owned by her father, they moved to the west using the money Sakura gave them in lieu of Hero Insurance.

Momo called on her to help protect Yuko after Yuko unwittingly took some of Momo's blood and partially broke her family's curse on accident, which drained a large amount of Momo's magical potential. Yuko and Mikan became good friends as well, though not as close friends as Momo and Yuko are.

Her family owns a fruit processing plant that specializes in making candies and confections from citrus fruits. 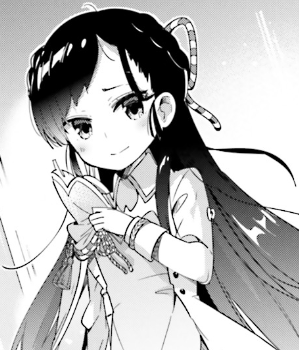 The key to so much, yet we know so little.
The biggest enigma of the series, and the most influential character of all. She has personally had a major impact on the lives of nearly everyone else in the story.

Sakura was extremely adept at manipulating seals and barriers; she is responsible for the barriers around Tama that normally keep Demons and Magical Girls from being able to interact with one another. Whatever motivated her to do something so drastic remains unknown, but at least we know her reasoning. From Yuko's limited contact with Sakura within her own subconscious, Sakura claimed she and Yuko think alike: they just want everyone to get along together.

Sakura raised Momo like a daughter, training her as a Magical Girl. Momo remembers her as being very skilled with magic, but very bad at managing her time and never getting her college coursework done before it was due. Sakura was also a mentor to Mikan, and suppressed her curse enough to at least allow other people to get near her without the demon inside her critically injuring them.

She meddled in the ancient curse afflicting the Yoshida family in an effort to save Yuko's life at Joshua's behest, sacrificing their family's luck and fortune for Yuko's health—and yet even this wasn't enough. This took a major toll on her magical abilities, and in return for her intervention, Joshua became her partner in protecting the city of Tama, in a time where things were much more dangerous than Present Day.

What exactly befell her and Joshua ten years ago is unknown; we only know the final outcome. They confronted something dangerous at the factory formerly owned by Mikan's family and Joshua got sealed into a box. Sakura destroyed the factory warehouse with her strongest attack in the fight. Afterwards, she took Joshua's box, and left it at his family's apartment with a note explaining what had happened to him—and then disappeared from public view. 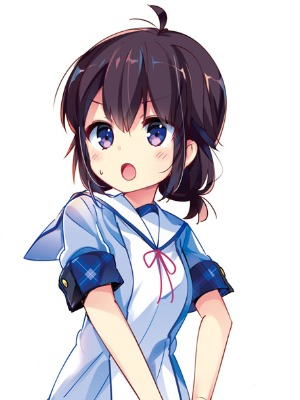 Yuko's classmate and one of her close friends, Anri Sata is also the most energetic person of the cast, playing soft tennis for the school. Her family runs a butcher's store at the Tamasakura Shopping District, and because of this she knows a lot about Sakuragaoka, as well as being rather adept in making people buy more of their meat. 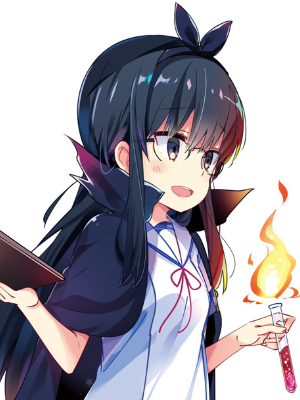 Perfect grades in everything but ethics.

Another of Yuko's classmates, she's the top student of their grade. However, she is the most interested in black magic, often using morally ambiguous methods to perform scientific studies of it, and, because of this, she took to stalking Yuko and Momo for "observational purposes."