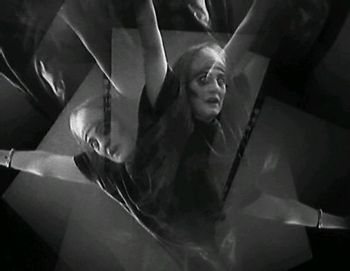 The Fall of the House of Usher is a 1928 American 13-minute short film dramatizing the story by Edgar Allan Poe.

A man wearing a top hat arrives at the titular house of Roderick and Madeline Usher (although their names are not mentioned in the short, which has no title cards). Madeline seems to go into some sort of trance, and then die. The visitor and Roderick put Madeline in a coffin and bury her—but it turns out she isn't really dead, and she climbs out of her coffin to have a word with Roderick.

This version of the Poe story was an amateur film directed by writer James Sibley Watson and his partner Melville Webber. It is one of many film adaptations of the short story, including a French feature version by Jean Epstein and Luis Buñuel also made in 1928, as well as a Vincent Price feature made in 1960. This film is remarkable for its bizarre avant-garde imagery, which bears an obvious debt to German expressionism.