Characters for the Tremors franchise are each listed in the segment in which they initially appear. 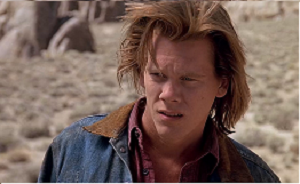 Played by: Kevin Bacon
"Roger that Burt, and congratulations. Be advised, however, that there are two more, repeat, two more motherhumpers."

One of two general handymen living in Perfection during the first Graboid Invasion. Falling in love with seismologist Rhonda LeBeck, he went on to marry her and move away. Made much better investments of his "rights" to all Graboid merchandising, perhaps because of her influence. 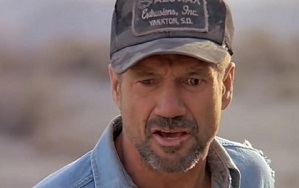 Played by: Fred Ward
"Damn it Valentine, you never plan ahead, you never take the long view, I mean here it is Monday and I'm already thinking of Wednesday... It is Monday right?"

One of two general handymen living in Perfection during the first Graboid Invasion. Unlike his partner, Val, he didn't invest himself so wisely in the post-Graboid money-making schemes, and ended up nearly broke and desperately trying to start himself an ostrich farm to recoup his losses. An offer from a Mexican oil company to exterminate Graboids would lead to him finding love with Kate Reily and turning his fortunes around. Moved out of Perfection with her and is implied to have taken up on Grady's offer to set up a Graboid theme park, assuring him of a much steadier income. 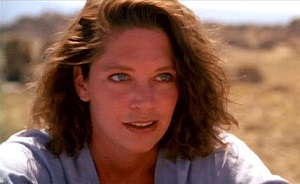 Played by: Finn Carter
"That'd make them a couple of billion years old... and we've just never seen one until now. Right."

A seismologist doing readings in Perfection at the time of the first Graboid Invasion. Shares mutual chemistry with Val McKee and the two wed after the Graboids are slain. 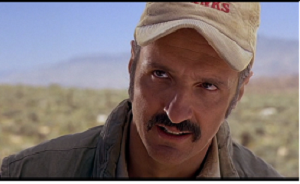 The resident survivalist of Perfection Valley, Burt is the only character to appear in every installation of the franchise.

Burt's wife. She shows up in the first movie, and is never seen again. We're told that she left Burt because he couldn't adapt to life without the threat of the Cold War.

The owner of Perfection's local store in the first film. He's killed by a Graboid after coining their moniker. A descendant of the Changs who founded the store when Perfection was founded as Rejection, a silver mining town in the 1800s, his niece inherits the store in the third film.

The perpetual thorn in Perfection’s side, he starts out as a ne'er-do-well kid in the first film, and graduates to a Jerkass land developer by the third film and throughout the TV series.

An old-time hippie who moved out to Perfection to rear her daughter Mindy alone, she is one of Perfection's primary business entrepreneurs after the first Graboid Invasion, specializing in Graboid merchandise.

Daughter of Nancy Sterngood and one of the few kids living in Perfection.

A rancher who appears in the first and third films. He survives the Graboids, but is killed by an Ass-blaster. After his death, his ranch goes to his niece, Rosalita.

Miguel: The BLM man gave me permission to kill anything that represented a danger to my cattle. El lobo, el coyote, and el Graboid.

A quiet Redneck type who lived in Perfection at the time of the first Graboid Invasion, which he didn't survive. Apparently a good friend of Burt's.

An elderly fellow and possibly the first person to encounter the Graboids.

A physician and his wife who'd planned to build a home in Perfection. A nighttime Graboid attack put a sad end to that idea, as well as to the couple and their station wagon. 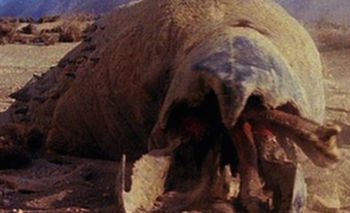 Giant monster worms that burrow under the ground. Graboids hatch from eggs, tunnel through the soil, and consume anything that makes noise or vibrations, though they will spit out anything that they cannot digest.

A fanboy of Val and Earl for their exploits in discovering and then killing the Graboids, he somehow knows an important member of a Mexican oil company. When Graboids begin stalking the oilfields the company draws from, he suggests that they approach Val and Earl to kill them. Whilst Val turns them down flat, he is able to convince Earl to take the job, becoming his temporary assistant. He has plans of using his share of the wealth to start a Graboid themepark, "Monster World", and is implied to do so with Earl as his partner after the film is over.

A paleontologist in the employ of the Mexican oil company that ends up hiring Earl, Grady and Burt to deal with their Graboid infestation. She and Earl hook up after the infestation is dealt with.

The second stage of the Graboid life cycle. More fragile than the Graboids that spawn them, but also far more prolific in reproducing, thanks to their asexual means of multiplying.

Tremors 3: Back to Perfection

Owner and operating of a faked "Graboid Safari", finding himself in over his head when actual Graboids resurface without anyone's knowledge. Goes on to sell his business to Tyler Reed and move out of the valley between the third film and the TV series.

A relative of Walter Chang who inherits his store and starts running it for herself.

The third and final stage of the Graboid life cycle. Shriekers molt and become Ass Blasters, who lay eggs that will become more Graboids.
Tremors 4: The Legend Begins

A dandy British gentleman who owns a silver mine in Nevada, around which is formed the mining town Rejection. Forced to confront the Graboids when they are accidentally unearthed, he eventually assists in saving the town, which becomes Perfection. He is the ancestor of Burt Gummer.

The local schoolmarm, determined to save her town of Rejection. She and Hiram Gummer are implied to become a couple, making her a maternal ancestor of Burt Gummer.

A mercenary gunslinger that Hirum Gummer hires to try and track down & kill the "Dirt Dragons" that have been killing the workers in the silver mine. Unfortunately for him, by the time they find them, the Dirt Dragons have grown up into full-sized Graboids, and his weaponry isn't designed for it. He gets killed because of his jangling spurs.

Played By: J.E. Freeman
A crusty old wagon-driver who is found killed by the "Dirt Dragons".

A Mexican miner, the first surviving witness to the "Dirt Dragons" and one of the few miners who refuses to leave despite the killing.

An elderly Native American who works as a handyman around Rejection.

The complaining matriarch of the Chang family, who runs the general store of Rejection.

The polite and even-tempered owner of the Rejection general store.

The Chang's only son, who makes swift friends with Hiram Gummer and has a rickshaw. 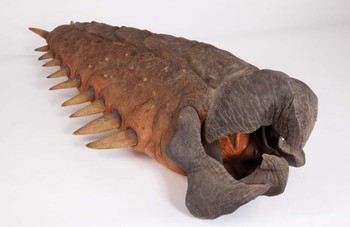 A former race car driver who buys Jack's tour business at the start of the series.

A former scientist who used to work in a secret government lab in Perfection Valley, part of the team that made Mixmaster, and the creator of Project 4-12. He is played beautifully by Christopher Lloyd.

Leader of the "Grabboid Rights" movement in episode 10. 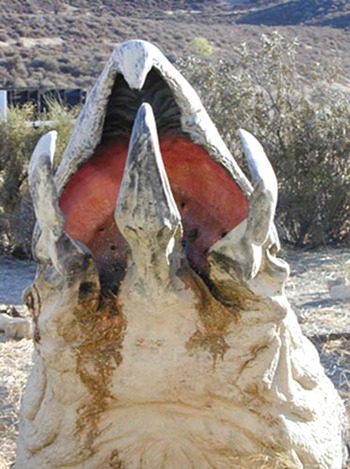 El Blanco is the name of the last remaining Graboid in Perfection. Strong, intelligent and apparently incapable of reproduction. El Blanco is the key to preventing the valley of Perfection from being grabbed by developers.

A Mixmaster mutation developed as a weapon for the Vietnam War by Cletus Poffenberger. Cletus rescued 4-12 from destruction when the lab was closed down. Described as a combination of a Rhino, aggressive spider, and wolverine.

A deadly Mixmaster fusion of plant and reptile that dissolves its victims in acid.

A Mixmaster mutation, though we never learn its exact composition, Invisibat lives in an old barn, and by the end of the final episode, seems to have developed a curiosity about Larry. Fast and strong enough to knock a full grown man to the ground, and leave them with a sizeable knot on their head, but doesn't seem to be overly dangerous from what we'd seen.

A strange Florida native who tracks Burt Gummer down in the desert, proclaiming his status as a fan and taking over as the camera-man for Burt's wilderness survival webshow. Burt is initially reluctant to accept his presence, but grows to tolerate him.

A South African veterinarian who works in the reserve, Single Mother to her daughter Amahle. Proves surprisingly dangerous when the Graboids start attacking.

An archaeologist who is operating a two-person dig with his lover/assistant Lucia, eventually digging up the fossilized skeleton of an African Graboid.

One of Van Wyck's agents, he operates as a bush guide for tourists.

An agent with the South African Wildlife Federation who hires Burt and Travis to tackle the Graboid problem in the Cradlestone Reserve. Strangely, he asks that they try and catch at least one alive. The reason why becomes very clear, very soon.

One of Van Wyck's agents, he operates as a bush guide for tourists.

One of the South African workers on the reserve, he has a crush on Dr. Montabu.

One of the reserve's South African workers.

An African woman who is working at Dr. Swan's archaelogical dig as his assistant and lover. 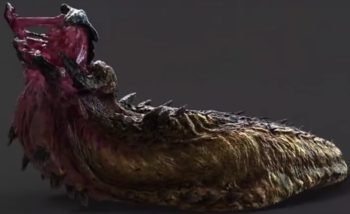 The stronger and faster relative to the American Graboids.

The stronger and faster relative to the American Ass-Blaster. 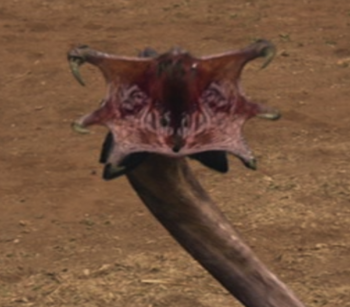 The snake-like tongues of the African graboids. They can separate from the graboid's mouth.

Tremors 6: A Cold Day In Hell

Valerie is the daughter of Valentine McKee and Rhonda LeBeck, and working as an intern at the research station when the newest batch of Graboids attack.