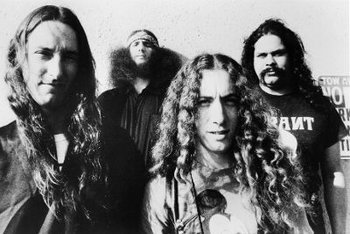 The original lineup, from left to right: Mark Adams, Dave Chandler, Scott Reagers and Armando Acosta.
"They say my songs are much too slow..."
— Born Too Late
Advertisement:

Hailing from Los Angeles, California, Saint Vitus are one of the most well-known and respected bands in the Doom Metal genre, alongside Pentagram, Witchfinder General, and Candlemass. The band originally formed in 1978 as Tyrant with Scott Reagers (vocals), Dave Chandler (guitar), Mark Adams (bass), and Armando Acosta (drums) and released two demos under this name before changing their name in 1980 to Saint Vitus, after the Black Sabbath song "St. Vitus Dance". This incarnation of Saint Vitus would go on to tour with bands like Black Flag (whose guitarist, Greg Ginn, would later sign them to his record label, SST) and release two albums and an EP before Scott left the band in 1986, to be replaced by Scott "Wino" Weinrich, the frontman of The Obsessed (who had only released a 7" at the time). The band released Born Too Late - widely considered to be among the best works Saint Vitus has released - in 1986, followed by two more studio albums before Wino left in 1991 to reform The Obsessed. Vitus picked up singer Christian "Chritus" Linderson from Count Raven; he would only record one album with the band before leaving and being replaced by the band's original singer. The band recorded and released "Die Healing" in 1995 before the members split up and went on to different projects.

In 2003, Saint Vitus reunited with Scott Weinrich for a single show in Chicago to fan approval. Six years later, the Born Too Late lineup reunited for a few tours, however original drummer Armando Acosta left during a European tour due to health issues; he died in late 2010.

Saint Vitus continues to record and play to this day, having released Lillie: F-65 in 2012, and during 2014, the band celebrated their 35th anniversary by performing Born Too Late in its entirety on a worldwide tour.

In 2015, original singer Scott Reagers returned to the band for a few select shows, before re-joining the band full time. The band has announced a second Self-Titled Album for a May 2019 release.