Film / Me Before You 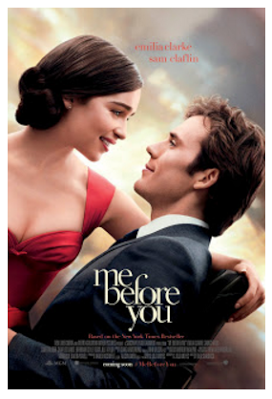 "You know you wouldn't have let those breasts that close to me if I hadn't been in a wheelchair."
Lou Clark: What do you usually do?
Will Traynor: I don't do anything, Miss Clark. I sit and just about exist.
Advertisement:

Me Before You is a 2016 drama film based on the 2012 novel of the same name, starring Emilia Clarke as Louisa, and Sam Claflin as Will Traynor.

Louisa "Lou" Clark, a 26-year-old living with and supporting her large working class family, is suddenly fired from her job at a cafe. With few qualifications, she looks for employment at a Job Centre. There, she learns of Camilla Traynor, who is looking for a caretaker for her son, Will, who was paralyzed from the chest down in a traffic accident two years prior. Camilla hires Louisa despite having almost no experience in care-giving, in the hopes that she will lift his spirits.

Their relationship starts off rocky as Will is understandably depressed and bitter over his accident, but over time, the two begin to bond and become closer, with Louisa taking him on outings and dates, and Will becomes enchanted with her bubbly, unwavering attitude and is intrigued with her "unique" sense of fashion.

Lou, however, is unaware of the deal made between Will and his parents regarding his condition...

The film adaptation of Me Before You provides examples of the following tropes: