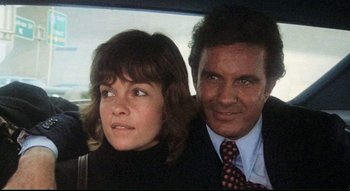 Obsession is a 1976 Psychological Thriller directed by Brian De Palma, with a screenplay by Paul Schrader.
Advertisement:

In present day (1975) New Orleans, Michael Courtland (Cliff Robertson) is a land developer who is deeply haunted by the past. In 1959, his wife Elizabeth (Geneviève Bujold) and their 9-year-old daughter Amy (Wanda Blackman) were abducted and held for ransom. The police bungled an attempt to rescue them, including a plan involving a briefcase full of blank paper instead of money. In the ensuing chaos, Elizabeth and Amy died. Michael has mourned their loss ever since, even erecting a memorial to them on the land where he'd intended to build a housing subdivision.

On a trip to Italy with his business partner Bob Lasalle (John Lithgow, in his first major film role), Michael revisits the San Miniato al Monte basilica in Florence, where he'd met Elizabeth. There, he encounters Sandra Portinari (also Geneviève Bujold), a local young woman (who speaks perfect English) helping out with the restoration of a painting. She looks exactly like Elizabeth.

Besides looks, Sandra is also similar in personality to Elizabeth, and Michael goes from being intrigued with her to being fixated. He not only falls in love with her, but sees her as a way to redeem himself. He even entertains the thought that Sandra is a reincarnated Elizabeth. Bob and his other associates become deeply concerned when he brings her back to New Orleans with the intention of marrying her. But the reverberations of the past will shake up Michael in a way he never thought was possible.

Any similarities to Vertigo in that plot are strictly intentional, as De Palma once again indulged in his admiration for the work of Alfred Hitchcock, including having Bernard Herrmann write the score. Bouncing back from the failure of Phantom of the Paradise, Obsession became a Sleeper Hit that helped set the stage for the success of his Breakthrough Hit Carrie.

No relation to the Pokémon fanfic.