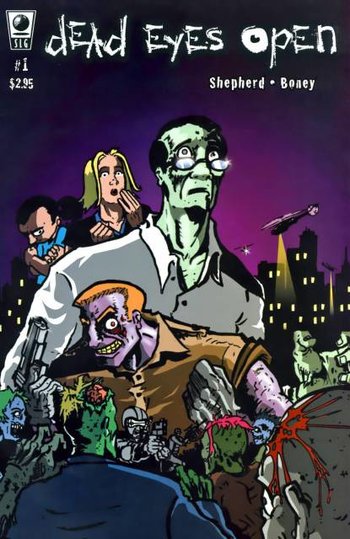 For one thing, he can't sleep — he doesn't have insomnia, he literally cannot sleep. He requires a special diet of high-protein foods (currently, he's subsisting mostly on tofu). He's lost his sense of smell. That's almost a good thing, though, because he's starting to smell himself — and unless he keeps the thermostat in his office turned down as low as it can go, the smell gets worse. He would bathe, but he's afraid that if he does, the water will only make the problem worse. His skin is peeling and falling off and doing worse things than that, forcing him to keep the lights down when he's at the office. Naturally, since he's a therapist, all of this is having a profoundly negative effect on his ability to do his job. His wife is very loving and supportive about all of this, but his young daughter is becoming increasingly withdrawn and confrontational, unable to cope with the changes her father is going through. It's enough to make someone want to die — except that, technically, John Requin already has.

At first, John wonders if he's the only one in the world with his condition. Then he sees an article in the tabloids about outbreaks of "the living dead" in cities around the world, and feels a glimmer of hope — hope that quickly turns to horror when he reads further, and learns of the measures the government is preparing to take against these "mockeries of life."

So begins Dead Eyes Open, a comic by Matt Shepherd and Roy Boney, Jr. that takes the typical Zombie Apocalypse story and turns it on its head. The comic was published from 2005 to 2006 by Slave Labor Graphics, and re-released in 2007 as a graphic novel. Starting July 5, 2009, the creators began posting the comic page-by-page on a blog; the last page went up on January 22, 2010. The first page used to be here

, but unfortunately the domain appears to have expired.