Remember, except where the sheet states otherwise, this is only for characters and examples from the main Marvel Universe (referred to in-universe as Earth-616).

Please do not list characters or examples from shows, movies or alternate universe versions here. If you've thought of a trope that fits an alternate version of the characters, please take that example to its respective sheet. 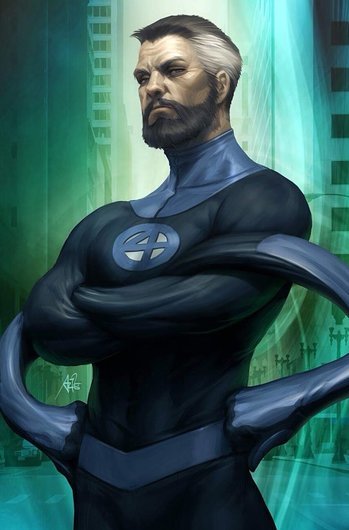 The certified Super Genius of the 4, and Team Dad with his ability to think his way out of the many problems they face. Reed grew up an extremely intelligent man. In fact, it was his idea to take the shuttle flight to study cosmic rays that day. After that fateful encounter, he gained the ability to stretch and mold his body however he could want. Whether that's sliding through a rivet hole or turning his body into a ball. Regardless, his brain will always be his best weapon to fight supervillains. Of course, that same brain can sometime infuriate the family, as it can lead him to alienating the others when he gets too caught up in an experiment or not listening to others. See Mister Fantastic for more info. 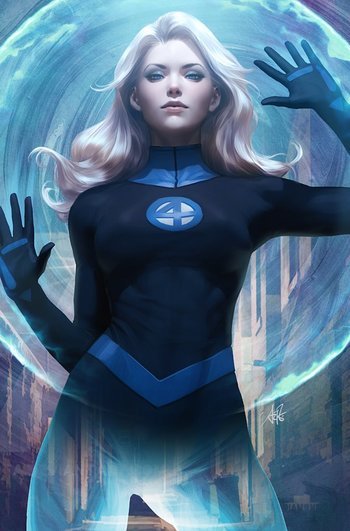 The Team Mom of the 4, "Sue" was originally just Reed's girl. In fact she first fell for him before finishing puberty, and slowly grew into his life. Her initial powers seemed to just be invisibility, but after some much needed growth and practice, that was upgraded into "projecting" that invisibility into force fields. Sue is fiercely devoted to the family around her, but that often can rub shoulders with Ben on his grumpier days, and she's more often annoyed at her brother Johnny's antics sometimes as well. And don't get her started on the frustrations she can have with her now husband over spending quality time with the family. Despite the rough patches though, Sue will do whatever it takes to ensure the world and her home is kept safe. See The Invisible Woman for more info. 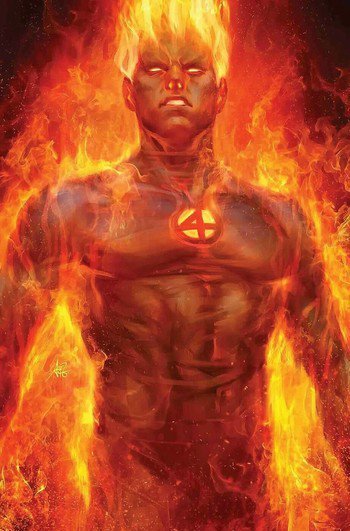 An impulsive (and soon, literal) hothead of the 4, Johnny is the younger brother of Sue Storm, the Invisible Woman. A classic case of Silver Age science fiction, Johnny was part of an outer space expedition that —alongside Sue, her boyfriend Dr. Reed Richards, and his associate Ben Grimm— granted him special powers via cosmic radiation. In his case, Johnny gained fire-based abilities, including flight. With them, Johnny became a founding member of the Fantastic Four, using their powers for the betterment of humanity. One of Spider-Man's longtime friends. See The Human Torch for more info. 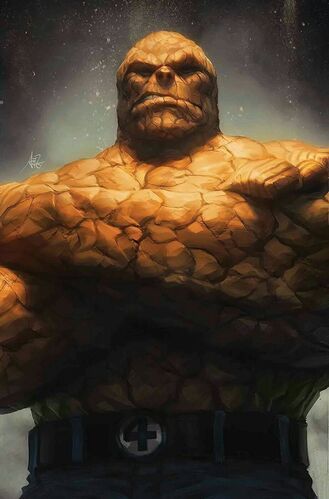 Perhaps the most iconic of the 4, simply because of his visual distinctiveness. Ben Grimm was Reed's college roommate, and when Reed needed someone to fly a ship into space despite the risks of cosmic radiation, he went to Ben, who initially refused and had to be goaded into flying the rocket. The rays afflicted Ben more severely than everyone else, turning him into a rocklike humanoid. Despite Reed's best efforts, he's consistently proven unable to revert Ben back to his normal human self for very long, something that causes both men no end of grief. Meanwhile, even with his condition, Ben has managed to become an "idol o' millions" thanks to his stalwart nature and good heart (constant bickering with Johnny aside). See The Thing for more info. 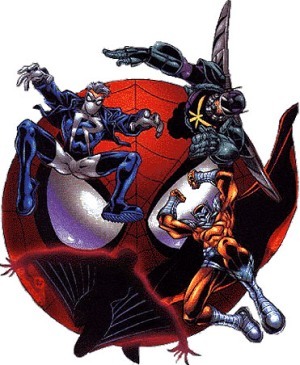 See their own page for more information. 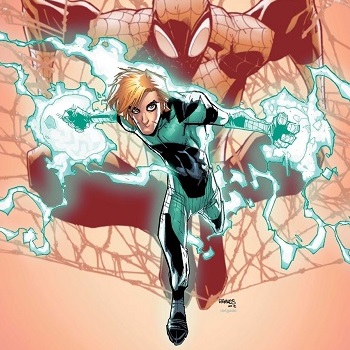 "Put the knife down and let the lady go. Sweet. I just said that thing super heroes say!"

An average fifteen-year-old given extraordinary abilities by an experiment gone wrong, leading him to become the sidekick to Spider-Man. After misusing his powers in a mission with the Avengers, he was depowered by the web-head. However, he has since been repowered by Doc Ock possessing Peter Parker's body. 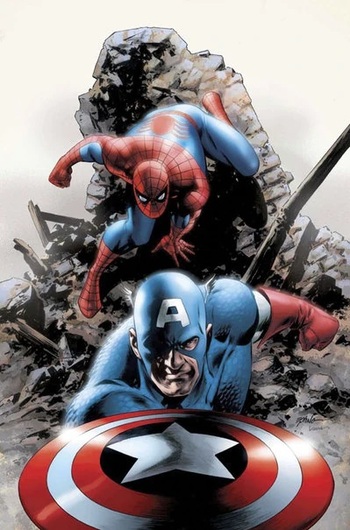 During World War II, Steve Rogers volunteered to receive the experimental Super-Soldier Serum. Enhanced to the pinnacle of human physical potential and armed with an unbreakable shield, he became Captain America. After a failed mission left him encased in ice for decades, he was found and revived by the Avengers, later joining their ranks and eventually becoming the team's leader. Spider-Man looks up to him as a role model, and when they are not teaming up, the veteran hero usually drops by to offer advice.

For more information on him, see his page. 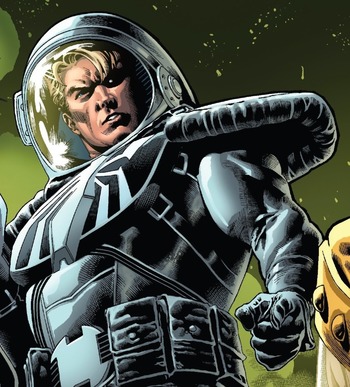 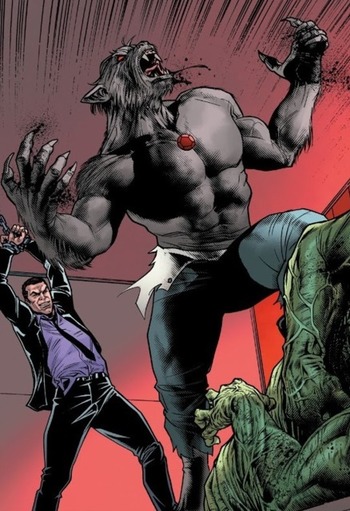 John Jameson is an astronaut, a test pilot and for his father J. Jonah Jameson the archetype of a true hero unlike these “masked clowns” like Spider-Man. John has also been transformed into a Werewolf-like creature called the Man-Wolf, and was once host to the Carnage Symbiote. 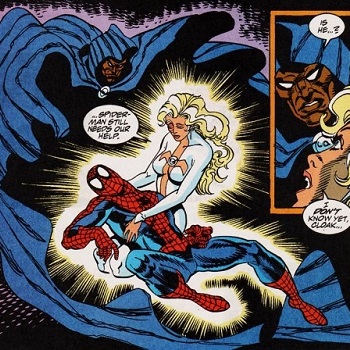 For more information on them, please refer to their page. 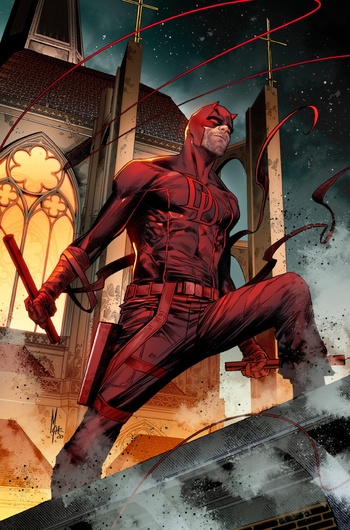 Spidey's most frequent team-up, Daredevil has the ultimate in Disability Superpower — he's blind, but his other senses are superhumanly sharp. This is the result of his having been blinded by a radioactive substance whilst rescuing a blind man (oh, the irony) from the path of an oncoming truck. He is also a superb gymnast and martial artist, having been trained from an early age by a mysterious blind sensei called Stick as well as showing him how to control his senses to live normally. His Secret Identity is that of Matt Murdock, attorney-at-law.

For more information on him, please refer to his page.

A masked wrestler who uses a supernatural mask to gain super strength and due to failing to fight a supernatural luchador named El Dorado has to defeat and unmask a costumed hero to prevent the luchador from killing him. He contacted Jameson to arrange a fight with Spider-Man, but the two became allies and the hero helped El Muerto defeat his foe.

Frog-Man is Eugene Patilio, the son of the former super-villain Leap-Frog, who hoped to do good and become a hero. He clumsily tried to battle crime to redeem his father's name. His only "power" is the ability to leap great distances with electrical coils in his boots. 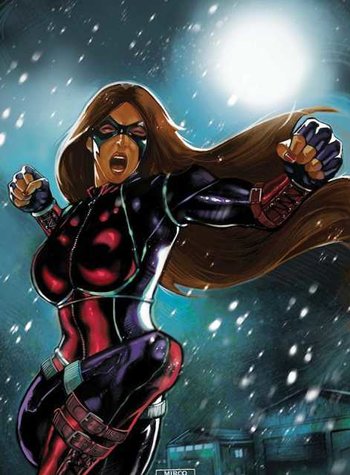 Sara Ehret, a pregnant scientist at Phelcorp (a subsidiary of Oscorp) works on gene therapy to cure Parkinson's disease when she is accidentally exposed to "Lot 777". The virus rewrote the DNA in her cells leaving her in a coma for 4 months. Coming out of her coma Ehret went on to have her child Madeline with no complications, however when her family came under threat by falling debris she displayed superhuman strength to save them.

Jackpot went on to train and become a government sanctioned Initiative superhero for New York City. Though she served as a crimefighter for a while, Sara Ehret had no desire to remain one, preferring to her normal life and family. When another woman, Alana Jobson, recognized Sara and showed genuine enthusiasm at paying her for the use of Sara's Jackpot identity and license, Sara took the offer and gave up costumed crime fighting. 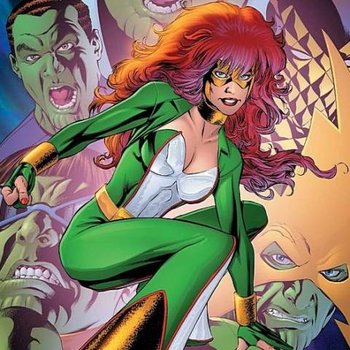 Alana buys Sara's identity, and while the latter goes in hiding, the former starts using a cocktail of enhancement drugs, including Mutant Growth Hormone to grant herself the powers of super-strength, stamina, and invulnerability associated with the Jackpot identity. In denial of her own sexuality, Alana developed a crush on Spider-Man, whom she emulated. She later was revealed to be a lesbian. She had been attracted to Sara but never revealed this to her. 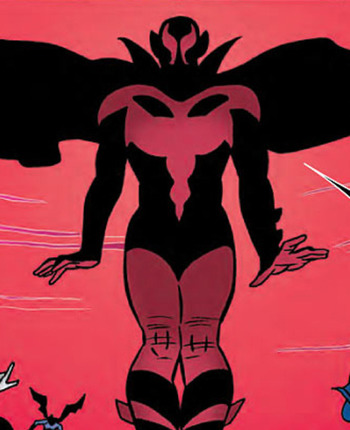 After finding a dark costume on the body of his older, slain self, the man known as Dr. Kevin Trench would eventually become the hero Nightwatch. 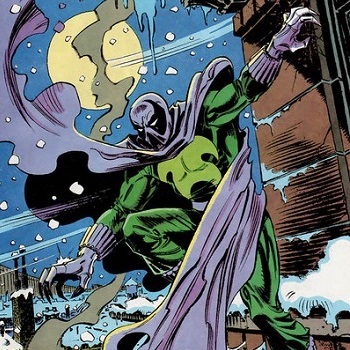 "Anyway, the first time the Prowler struck, I was just a know-nuthin' kid—I was hardly wet behind the ears—which is why Spider-Man was able to beat me. But I learned a lot since then. I'm older, stronger, smarter. And what's more—I've got a real mission."

Hobie wanted to be noticed for his genius after feeling stuck as a window washer. He invented several gadgets to make the work easier, but his boss wouldn't listen to his ideas. Modifying the look, the outfit for cleaning windows eventually became a costume that Hobie dubbed the Prowler. While at first torn up about whether the Prowler would be a hero or villain, Hobie thought he'd compromise by having the Prowler steal, while Hobie Brown returned the goods later. However, when stopped by Spider-Man, Hobie realized that the life of a villain wasn't for him, and soon became the wall-crawler's steadfast ally. He is currently Parker Industries' chief-of-security, and masquerades as Spider-Man when Peter is out of town. 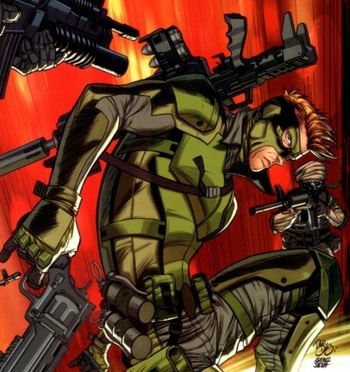 Terrorism's greatest enemy, Solo is an adept soldier with the ability to teleport himself certain distances. As long as he lives, terror dies. 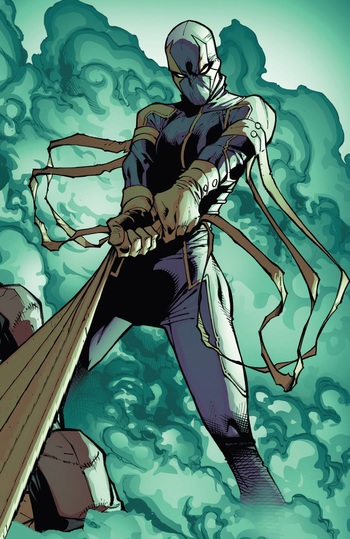 Yuri Watanabe is a NYPD Captain who rose through the ranks alongside Jean DeWolff, and is an ally of Spider-Man. She is also the current Wraith. 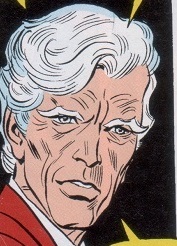 "Be good to her—son! Be good—to her—she loves you—so very—much— "

A retired New York Police Department captain and the father of Gwen Stacy.

"Did you set a perimeter?!! Did you call in for Emergency Services? No! No?? There's a live crime scene in there and you're busy cuffing the only damn person who's doing the damn job you're supposed to! Go be cops before someone else gets hurt!!!"

Jean DeWolff is a New York cop and ally of Spider-Man. Her brother, Brian DeWolff, was the troubled villain/vigilante known as "The Wraith". 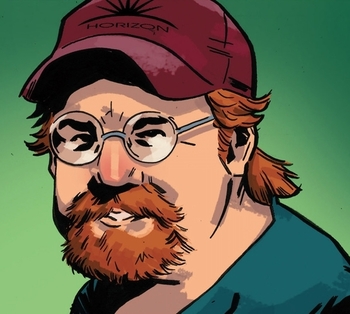 A genius scientist and inventor, and one of Peter's childhood heroes, Max Modell was the head of the Horizon Labs up until it was taken over by Alchemax. 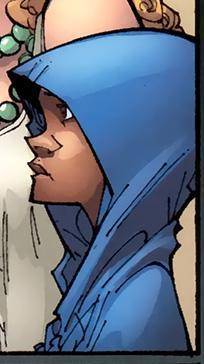 Co-worker of Peter Parker at Horizon Labs and also a child prodigy, he works at Lab 5. He would later assist Doctor Octopus in creating his city wide security system before the Spider-Island.

One of Peter's co-workers at Horizon Labs, Sajani Jaffrey was cold, pragmatic, and ambitious. Following Horizon being bought up by Alchemax, she was hired by Peter Parker, but repeatedly undermined his authority to work on her own unauthorized side-projects, and even outright betrayed him. She strongly dislikes Spider-Man, and was the one who forbade Peter from supplying Spider-Man with Parker Industries tech. 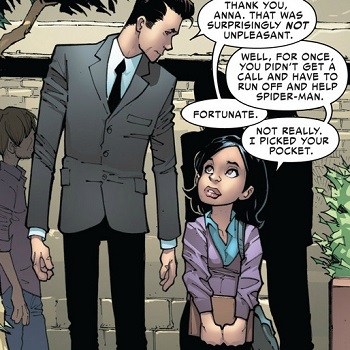 A chemistry and physics tutor who offers her help to Otto Octavius/Peter Parker. 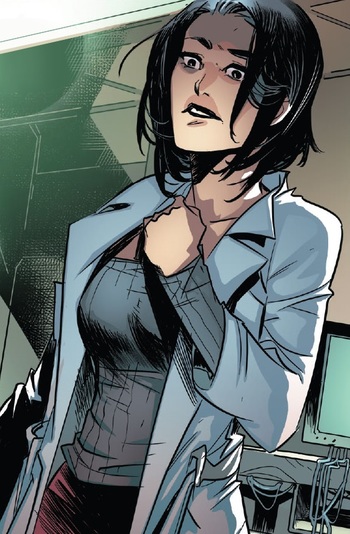 Ravencroft Sanitarium for the Criminally Insane psychiatrist. She has been the Doctor to Carnage, Shriek, Carrion, Vermin, Chameleon, Massacre and Venom to name a few. 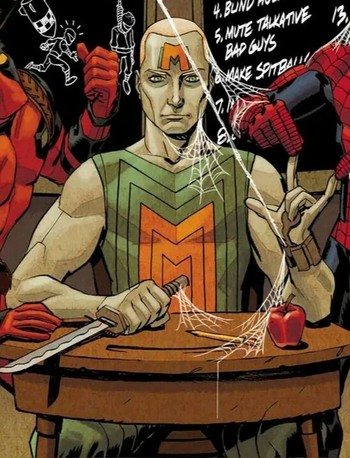 The Master Matrix was an advanced Life-Model Decoy found in a Hydra weapons depot on an uncharted island.
Vin Gonzales 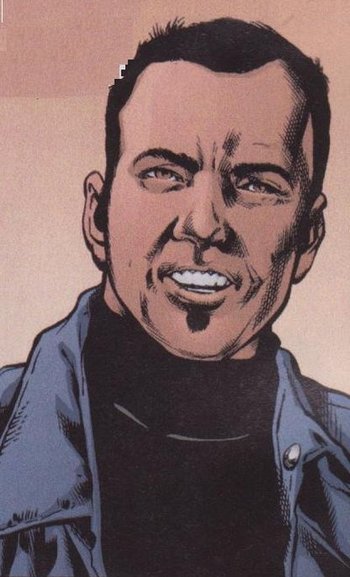 A police officer in New York. Doesn't have faith that Spider-Man is a good guy.

A professional wrestler in New York City. While by no means a villain, he was the first opponent Peter Parker faced immediately after gaining his spider-powers.