Characters / Regalia: Of Men and Monarchs

The Rashytil Expanse and beyond is home to a large number of colourful, quirky characters. Here are the many you will meet on your journey.

"Leave it to me!"
The protagonist. A reluctant hero who inherited the throne to Ascalia after it had been destroyed in a war.

Kay's loyal bodyguard. He has vowed to defend the heir to House Loren with his life. In most other games, he would be considered the hero. 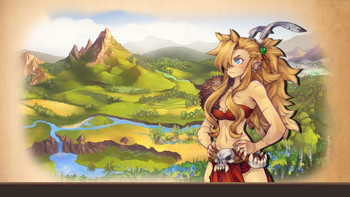 "We move now, yes?"
A wild Kelra forest warrior feared by Ascalians and known as "The Beast". She is the first character outside of Kay's inner circle to join his party. 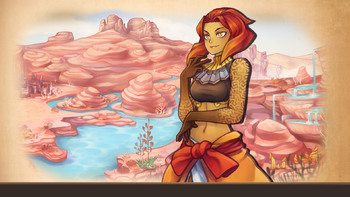 "Come on, baby, light my fire!"
A Kindling fire mage sought after and feared for her innate magical abilities. 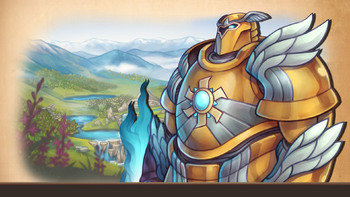 "I hold the light!"
The spirit of a fallen Lordemarian Solar Knight, resurrected well past his time. He inhabits the golden armor Kay and Griffith discover in the armory at the beginning of the game. 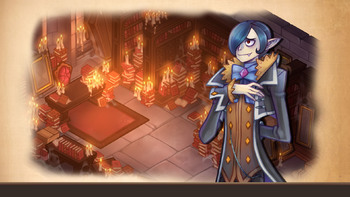 "Bevare...the bat!"
A vampire wannabe who took up residence in a dusty old archive.

A self-styled playboy who joins the party at the beginning of Chapter 3. Is good with a bow, but hates expending effort on it.

"One chance is all I need!"

A thief/bounty hunter on the hunt for Diego. Gwen talks him into joining the party in Chapter 3, which he accepts so that he can keep a close eye on Diego and eventually kill him (or so he says). 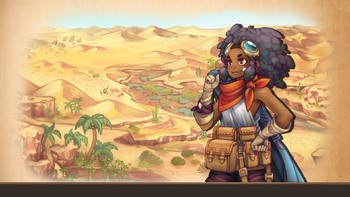 An engineer from the magic-using kingdom of Shedu. She joins you if you have a reputation level of 3 with them.

An ambassador from the sun-worshipping kingdom of Lordemar. She joins you if you have a reputation level of 3 with them.

A prince from the elven kingdom of Alfheimr. He joins you if you have a reputation level of 3 with them. 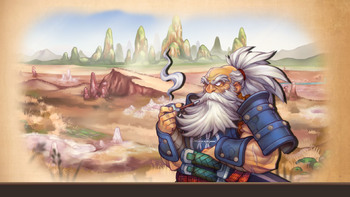 A dwarf shogun from the Empire. He joins you if you have a reputation level of 3 with them.

One of two extra player characters added in the Paragons and Pajamas expansion. She comes from Armelisse, and joins your party if you have a reputation level of 3 with them.

One of two extra player characters added in the Paragons and Pajamas expansion. Yusuf hails from the merchant princedom of Minwe (the same country Haksun comes from), and will join your party if you have a reputation level of 3 with them.

"I know things started off rough, but please don't give up."

The younger of Kay's sisters. Elly is bubbly and perky and loves to go on adventures. She serves as House Loren's unofficial diplomat.

"What a terrible, terrible dump. 'Glorious Kingdom', my ass."

The elder of Kay's sisters. Gwen is bitter and often sarcastic and hates doing the messy work that Kay and Griffith tend to do, but is exceptionally good with administrative affairs. 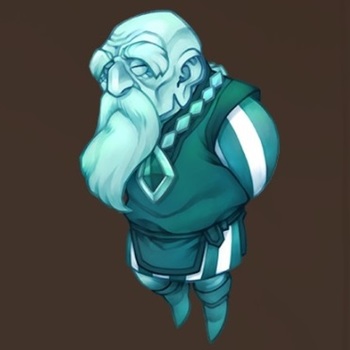 "Do you often wander into other fellas' households, slurping their deaders?"
Kay, Elaine, and Gwendolyn's ancestor until The Reveal, and founder of House Loren and Ascalia. His ghost reappears after Kay drinks his ashes, mistaking them for old tea.
Residents of Ascalia

Proprietors of the Placeholder Inn. Baz is tall, imposing and only communicates in grunts and growls. Lilka is short, feisty, and does all of the talking (and much of the work) between them.

A drunkard who spends most of his time at the Placeholder Inn.

A merchant whose caravan stops in Ascalia at the beginning of the game. Sells basic goods and accessories.

A blacksmith with a pet puppy dressed up in tutu. Makes weapons for your party.

A writer who loves seeking out weird stories.

An alchemist with a keen interest in scientific pursuits. Crafts potions. 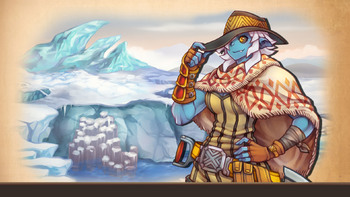 "Isn't that thought electrifying?! I can't wait to name 'em and dress 'em."
A half-elven miner with a curious rock collection. Crafts accessories. 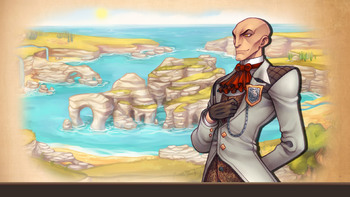 "Punching, albeit enjoyable, would give us little benefit...at least for now."
A scary-looking debt collector from the Furtive Union.
The Unity

The leader of the Unity, a group of peasants from the lands around Ascalia seeking representation.

The heads of two families feuding over a piece of land. Negotiating a deal between them is a task given to the protagonists by the Unity.

A dragon that has recently chosen to settle on the land fought over by Tag and Bink, complicating negotiations.

A nobleman and the real heir to House Loren.

"Have you ever wanted to relive the adventures of those before you, and yet, at the same time, go beyond their path? That is why I am traveling."

An adventurer that Kay's party bumps into while exploring the lands of Ascalia.

A female wanderer that accompanies Reize on his journey.