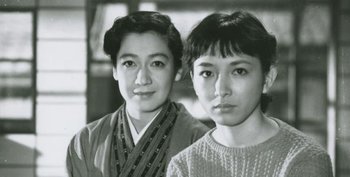 Tokyo Twilight is a 1957 film directed by Yasujiro Ozu.

Shukichi (Ozu regular Chishu Ryu) is a bank executive. He is a single father—his wife ran away years ago—with two daughters, elder daughter Takako (another Ozu regular, Setsuko Hara) and younger daughter Akiko. Both daughters have troubled lives. Takako has left her husband Numata, and is living with her father along with her little daughter Michiko. Akiko turns out to be pregnant by her loser boyfriend, Kenji.

While trying to find Kenji, Akiko stumbles across Kisako, a mahjong parlor operator who seems strangely knowledgeable about her family. When Takako hears about this she figures out that Kisako is, in fact, their long-lost mother.

Not to be confused with another, better-known Ozu film, Tokyo Story.