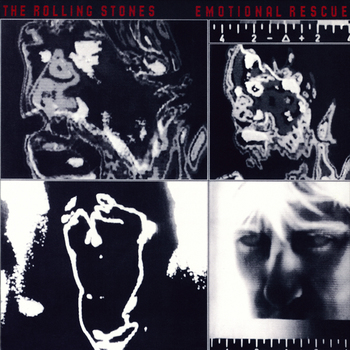 "Where the boys go, down the disco."
Advertisement:

Emotional Rescue is the fifteenth studio album (seventeenth American album) by The Rolling Stones, released in 1980. With dozens of songs recorded for the album, the band eventually picked 10 of the songs, and many of those left over later made it onto Tattoo You and the bonus disc on the deluxe edition of Some Girls. Oh, and another song was released as the B-Side to "She Was Hot" from Undercover.

Upon release, it was a chart topper in both the US and the UK (the first time in the UK since Goats Head Soup). However, it received mixed reviews, and it still does to this day.