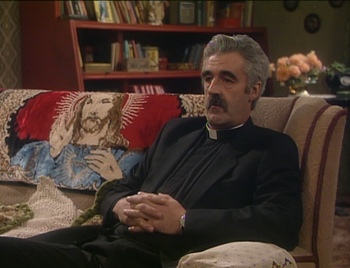 Father Stone would just like you to know that he's absolutely fine.
Ted announces to a horrified Dougal that Father Paul Stone (Michael Redmond) has come for his holidays. For the preceding six years, Father Stone has visited the parochial house; he is pathologically boring and is totally unable to hold a conversation, giving one-sentence answers at the most and dominating the room with his awkward protracted silences. To try to stop him from coming, Ted told Father Stone incredible lies, but this failed to deter him.
Advertisement:

Even when Father Stone arrives, Ted and Dougal make excuses to have him leave the house, but Stone offers to stay regardless of the conditions. After Father Stone stays through Ted's birthday party three weeks later, making it an awkward time for all the guests, Ted prays to God to get rid of Stone anyway he can. The next day, Ted and Dougal go to the Crazy Golf Course in the middle of a thunderstorm, thinking this is better than hanging around Father Stone. However, Father Stone has followed them there. Ted suggests that Father Stone should try a go at golf; as he raises the club, Father Stone is struck by lightning.

At the local hospital, Father Stone is found to be in shock: standing up, still holding the golf club, and not responding to any stimulus. Father Stone's parents and maternal grandmother arrive. His grandmother privately warns Ted that she knows what he is up to, while his parents go on about how much Father Stone looked forward to his visits at Craggy Island, showing a picture of Ted and Father Stone that he drew. Ted feels very guilty about having prayed for Father Stone to leave, and scared that the grandmother seems to know what he did. Ted begins praying at Father Stone's bedside, saying that Paul can stay for as long as he wants, that he will look after him "until the end of his days". After a brief interval, Father Stone regains consciousness, and is his old self again, giving one-word answers. Finally, Father Stone, as promised, has been allowed to stay on Craggy Island. A faint smile breaks across his face.