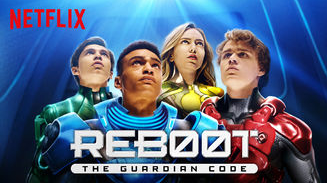 ReBoot: The Guardian Code is a CGI/Live-Action reimagining (or reboot, if you will) of the animated series ReBoot.
Advertisement:

In a hidden lab in the basement of Alan Turing High, an artificial intelligence named VERA* Virtual Evolutionary Recombinant Avatar watches over cyberspace. Its stability and security is threatened by a deranged hacker known only as "The Sourcerer" and his viral army. To lead that viral army, the Sourcerer has also resurrected the very dangerous virus known as Megabyte to ravage the Net once more.

To stop this new evil, VERA recruits four teenagers to travel into the digital world and stop him. Their de facto leader, Austin (Ty Wood), is also the son of VERA's creator and hopes to use the experience to discover more about his deceased father and the creations he left behind. Along with his nerdy friend Parker (Ajay Parikh-Friese), social media butterfly and popular vlogger Tamra (Sydney Scotia), exceptional and exceptionally put-upon athlete Trey (Gabriel Darku), and a newly-humanized teenage VERA (Hannah Vanderbygaart), these five must balance their personal lives with saving cyberspace from the Sourcerer.

The show aired its only season in 2018, divided into two half-seasons (marketed as Season 1 and 2), from March - September 2018 on Netflix and YTV.