Tales from Watership Down

The sequel is a compilation of short stories, some of which are rabbit folktales and some of which expand on what happened to Hazel and his companions after the first book. Some of them are comedy... and others are flat-out Cosmic Horror. 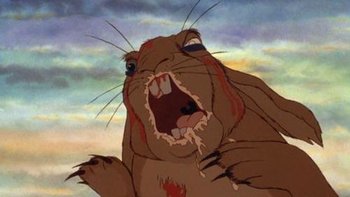 Quality family entertainment.
Yes it's a U-rated film (or G-rated, if you're Americannote in Germany, it has a 6+ rating, meaning kids over six years old can watch it, though a PG rating would suffice for something like this, and Germany doesn't have a proper PG rating. It goes 0, 6+, 12+, 16+, and 18+), but the movie is very disturbing and does raise questions of "How is this appropriate for children?" and "Why do people think this is for kids just because it has bunnies in it?" Some examples include: