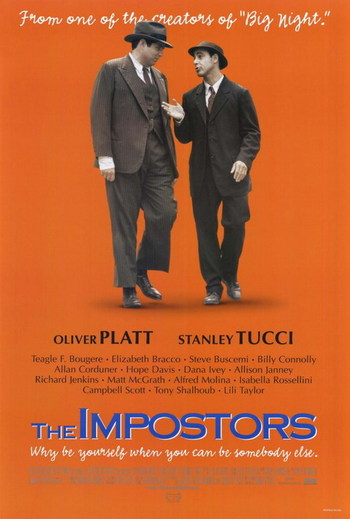 The Impostors is a 1998 Genre Throwback to the Screwball Comedy era, specifically to films made by the Marx Brothers and Laurel and Hardy. It's written and directed by Stanley Tucci, and features an All-Star Cast including Tucci, Oliver Platt, Alfred Molina, Campbell Scott, Lili Taylor, Steve Buscemi, Hope Davis, Billy Connolly, Tony Shalhoub, Allison Janney, Richard Jenkins, and Isabella Rossellini.

Arthur (Tucci) and Maurice (Platt) are two out-of-work actors in 1930's New York City. One night, they're in a bar, and they end up insulting Sir Jeremy Burtom (Molina), a stage actor. An angry Burtom pretends the two injured him in a fight and sics the cops on them. In desperation, Arthur and Maurice end up stowing away on an ocean liner, and while trying to avoid Burtom (who happens to be on board), and the police, they end up interacting with a host of oddball characters.

While it received mixed reviews at the time of its release and was ignored by audiences, the film has gained a small cult following and, along with Brain Donors, stands as a very funny Genre Throwback.

The Impostors provides examples of the following tropes: