Vincent and Jules as a duo
Advertisement:
Vincent Vega 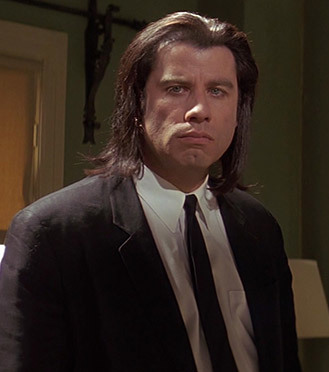 "You play with matches, you get burned."

Played by: John Travolta
Dubbed in French by: Michel Vigné
Dubbed in Japanese by: Hirotaka Suzuoki

"And right now I'm a fucking race-car, alright, and you got me in the red."

One of the three lead characters in the film, and a Villain Protagonist. Together with Jules, he's part of Marsellus Wallace's organized crime group. Vincent has just come home to LA after serving in Amsterdam for about three years. Compared to Jules, he's pretty lousy at his job, utterly genre blind and dumb, a heroin addict suffering constipation (a side effect of heroin), and on top of that he tends to be a big jerk.

Along with Mia, he's the protagonist of the film's first segment. 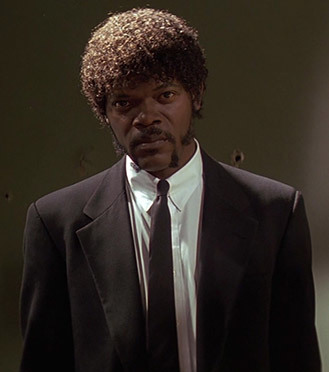 "I don't remember asking you a goddamn thing!"

"If my answers frighten you, Vincent, then you should cease asking scary questions."

One of the three lead characters in the film, and a Villain Protagonist. Together with Vincent, he's a part of Marsellus Wallace's organized crime group. He's been living in Inglewood for several years. Compared to Vincent, Jules is miles more intimidating, capable of scaring whoever he's facing in a fingersnap. However, he's much more personable, and believes in the Bible.

He's the protagonist of the film's third segment. 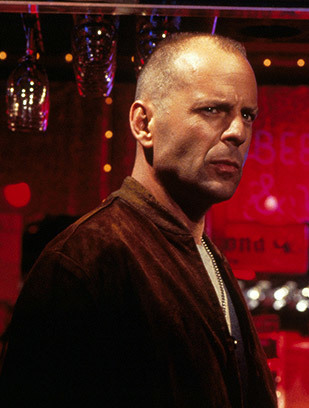 "He was dead before he ever stepped into the ring."

Played by: Bruce Willis
Dubbed in French by: Patrick Poivey
Dubbed in Japanese by: Kōichi Yamadera

"That's how you're gonna beat 'em, Butch. They keep underestimating you."

One of the three lead characters in the film. Unlike Jules and Vincent, Butch is an Anti-Hero, a decent and honorable guy who would rather live his own life with his girlfriend Fabienne. He is a boxer who's been in the ring for quite a few years, but his story starts after he double-crosses the mob he affiliated himself with by winning a match so handily he kills his opponent, despite being paid to take a dive.

Along with Marsellus Wallace, he's the protagonist of the film's second segment. 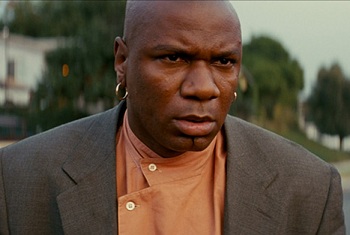 "Pride only hurts, it never helps."

Played by: Ving Rhames
Dubbed in French by: Jean-Michel Martial
Dubbed in Japanese by: Tesshō Genda

The leader of the organized crime group that Vincent and Jules work in, and a Villain Protagonist, being the one who Butch is affiliated with at the start of the film. In spite of how powerful he is, Marsellus is calm and reasonable as long as one doesn't betray him. Butch apparently doesn't get the memo, and for double-crossing him, Marsellus will hunt him down to the ends of the Earth and beyond.

Along with Butch, he's the protagonist of the film's second segment. 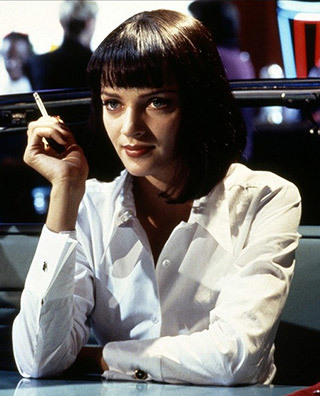 Played by: Uma Thurman
Dubbed in French by: Juliette Degenne
Dubbed in Japanese by: Masako Katsuki

"Why do we feel it's necessary to yak about bullshit in order to be comfortable?"

Marsellus Wallace's wife, a spoiled former actress who starred in a TV pilot for a series that never kicked off.

Along with Vincent, she's the protagonist of the film's first segment, where Vincent takes her out for dinner. 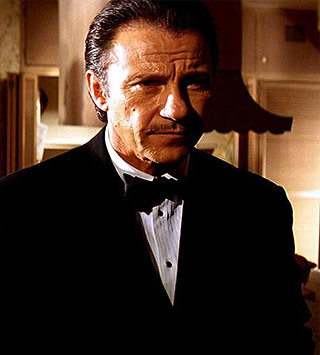 "I don't smile in pictures."

"I think fast, I talk fast, and I need you guys to act fast if you wanna get out of this."

Marsellus Wallace's top cleaner, the Wolf is a stoic gentleman with excellent manners and a mouth just as foul as his co-workers. He's called by Marsellus to help Vincent and Jules dispose of the body in their car before time runs out.

Played by: Phil LaMarr
Dubbed in French by: Gunther Germain

One of the four friends at the start of the film that Vincent and Jules track down to kill in the film's prologue. As seen in the third segment, he's actually an informant that works for Marsellus Wallace, meaning he's the only of the four who comes out unharmed. Though he doesn't have much time on-screen before his fate ends up naming a trope... 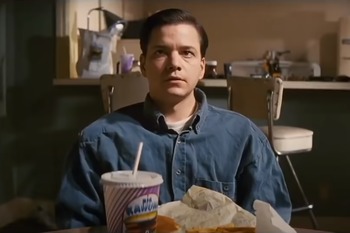 One of the four friends at the start of the film that Vincent and Jules track down to kill in the film's prologue. Seeing as he's the most versed when it came to screwing Marsellus up, Brett seems to be their prime target of the four. 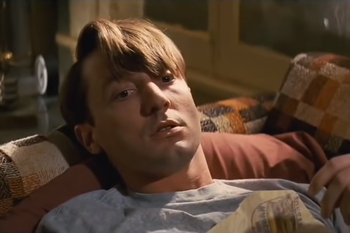 One of the four friends at the start of the film that Vincent and Jules track down to kill in the film's prologue. He's also the one with the least screentime, seeing as he has barely anything to say before Jules guns him down. 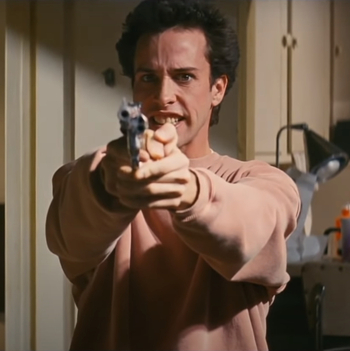 One of the four friends at the start of the film that Vincent and Jules track down to kill in the film's prologue... except, unlike the other three, he doesn't appear in the prologue, only in the film's third segment, where he tries his best to ambush the hitmen before failing pathetically and ending up with the same fate as them. 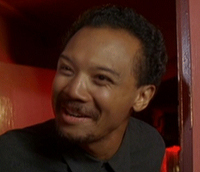 "Get yo asses down in here!"

The owner of the bar Marsellus Wallace conducts his business at, he's a very amicable and polite man.

Antwan Rockamora a.k.a. Tony Rocky Horror
An unknown man who is mentioned during the film. He apparently had an incident with Mia that caused Marsellus to dispose of him.

"All right, everybody be cool, this is a robbery!"

Played by: Tim Roth
Dubbed in French by: Pierre-François Pistorio
Dubbed in Japanese by: Yoshito Yasuhara

One of the two very first characters seen at the start of the film, alongside his wife Yolanda. "Ringo" (as he's referred to by Jules) is tired of mugging convenience stores due to the language barrier, so in the restaurant he's having breakfast with Yolanda in, he decides they should switch their targets then and there.

Along with Yolanda, he's one of the villains of the film's third segment. Of the two, Pumpkin is the calm mastermind. 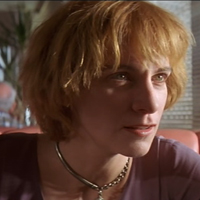 "Any of you fucking pricks move, and I'll execute every motherfucking last one of ya!"

Played by: Amanda Plummer
Dubbed in French by: Françoise Dasque
Dubbed in Japanese by: Shinobu Adachi

"I bet you could cut down on the hero factor in a place like this."

One of the two very first characters seen at the start of the film, alongside her husband "Pumpkin". Yolanda lives the thug life with her husband at their leisure, though she understands Pumpkin's boint that mugging convenience stores is becoming harder due to the language barrier. As a result, she agrees they should switch their preferred targets of robbery in the restaurant she and Pumpkin are having breakfast, then and there.

Along with Pumpkin, she's one of the villains of the film's third segment. Of the two, Yolanda is the crazy enforcer. 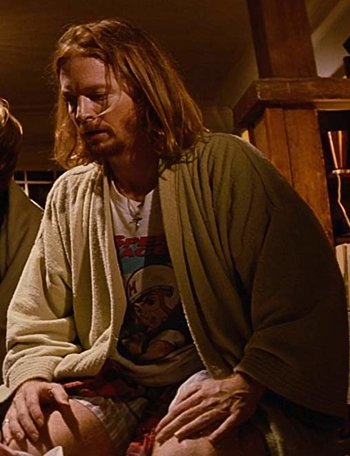 A drug dealer who sells Vincent his finest heroin at the start of the film's first segment. He later helps Vincent cure Mia's overdose. 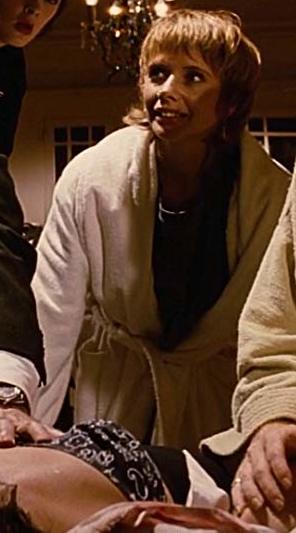 A friend of Lance's and Jody's who crashes on their couch and indulges in recreational drug use.
Zed and Maynard 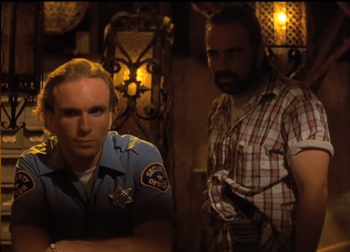 "Well, bring out the Gimp."

Zed: You wanna do it in here?
Maynard: Naws. Drag him back there to Russel's old room.

A pair of brothers that operate a pawn shop... which doubles as a rape dungeon. Unlike the majority of the criminals in the film, both are portrayed as despicable and having no redeeming qualities, seeing as they readily delight in the misery of Butch and Marsellus Wallace.

Both are the true villains of the film's second segment. 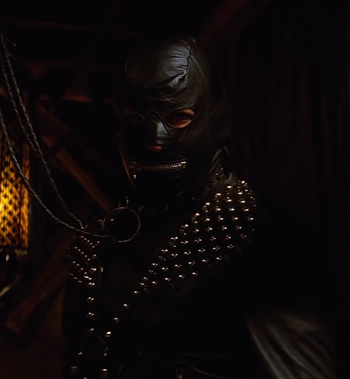 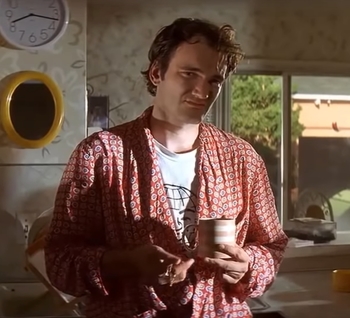 "But you know what's on my mind right now? It ain't the coffee in my kitchen."

"I don't need you to tell me how fucking good my coffee is, okay? I'm the one who buys it. I know how good it is. When Bonnie goes shopping, she buys shit! I buy the gourmet expensive stuff cause when I drink it, I wanna taste it."

Jules' former partner-in-crime who worked for Marsellus Wallace before retiring from the mob life. He's an old good friend of Jules. Unfortunately, Jules and Vincent drop by his house in the morning just a few hours before his wife gets home from work with the pretense that they need a place to hide before disposing of Marvin's dead body; Jimmie is, obviously, not pleased at all.

Monster Joe
The proprieter of Monster Joe's Truck and Tow, an auto scrapyard that apparently moonlights as corpse disposal. 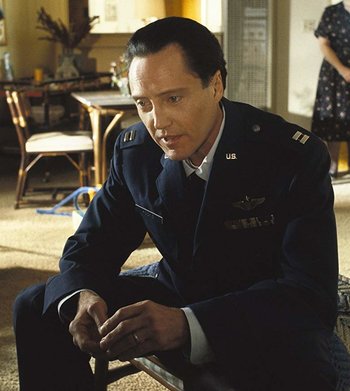 "I hid this uncomfortable hunk of metal up my ass, two years."

A soldier who fought in the Vietnam War alongside Butch's dad. He gives a young Butch his dad's watch at the start of the film's second segment.

Butch's wife. She's sweet, though pretty quirky and a bit of a ditz, since her clumsiness ends up kicking the plot on full force after she leaves Butch's treasured watch in their apartment. 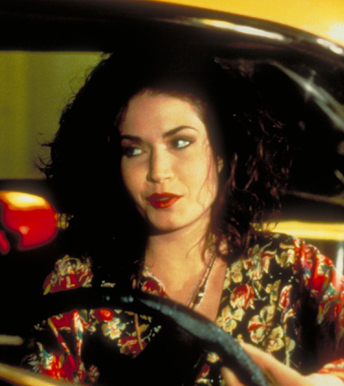 Butch's driver, who takes him away from the ring once he's done with the match.