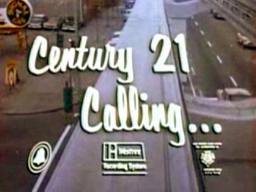 Mike Nelson: "They want their little gold jacket back."
Advertisement:

Century 21 Calling is a 1962 stealth advertisement for telephone technology (in this vein, much like Once Upon a Honeymoon). It aired as a short feature with Mystery Science Theater 3000 episode 906, The Space Children.

It was directed by Jerry Fairbanks and features ample footage of the 1962 Seattle World's Fair.