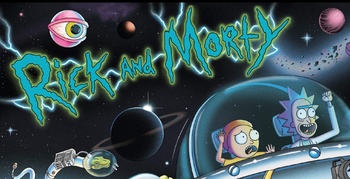 "And awaaaay we go!"
"Pinball. Sometimes it's just the way the ball bounces… haha, you know? Yep, I made a pun there."
— Morty
Advertisement:

Rick and Morty is a pinball machine created by Spooky Pinball (designed by Scott Danesi, creator of Total Nuclear Annihilation, and sporting rules by Bowen Kerins). Announced in December of 2019, it sold out its entire 750-unit run in mere hours and began to see release in early 2020.

An adaptation of the Adult Swim cartoon of the same name, the player is cast as one of many alternate versions of Morty. You're tasked with accompanying Rick on various adventures (all taken from episodes of the show), which steadily fills out your "Morty Adventure Card". You'll also be entrusted with collecting megaseeds, which are critical for increasing end-of-ball scoring. The only way to obtain them is by charging up Rick's portal gun and visiting alternate dimensions, all of which change the lighting and rules in some fashion (ranging from increasing the value of a Slam Save to disabling ramp scoring to playing a Wilhelm scream whenever the ball hits anything). The "Flooble Crank" further adds some complexity to the game, being a horseshoe-shaped area of the playfield featuring an unusual method of locking ballsnote dubbed the "Danesi Lock 2.0", improving on the method featured in Total Nuclear Annihilation that opens up the possibility of stealing a multiball mode from another player when two or more are playing.

Spooky debuted a new business model with this game: in addition to the standard version, they made a "Blood Sucker Edition" available to members of their "Fang Club" (which also allowed them early access to purchase the game). It features a number of cosmetic upgrades, including purple armor for the cabinet itself and anti-glare glass. As a celebration of how quickly the game sold out, the company also gave every purchaser a topper (featuring Rick and Morty themselves, along with a portal that can rotate and flash when the game triggers it) for no additional cost.