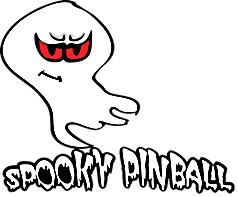 We put the boo in bootique pinball!
Advertisement:

Spooky Pinball, LLC is a small company based in Bentin, Wisconsin that produces Physical Pinball Tables. It's notable for being one of the few pinball companies in The New '10s and beyond to have a significant number of games with original themes (as Licensed Pinball Tables had become the norm by the Turn of the Millennium). They also limit their manufacturing runs to a few hundred units at most. What really makes them stand out, however, is that the entire company was founded as an outgrowth of a podcast about pinball.

The Spooky Pinball Podcast began on April 1, 2010, with new episodes following every month after to this day. The following year, host Charlie Emery and his father brought a custom Godzilla pinball machine (a rethemed version of Firepower II) to the Midwest Gaming Classic convention. Its high quality led to people in the industry taking notice, eventually leading to his employer becoming a pinball supplier. Furthermore, Charlie also met Ben Heck there, which directly led to their collaboration on a brand new game. The company proper was founded in early 2013, and their first game – America's Most Haunted – was released the following year.

Their subsequent games have led them to find success and subsequently growth: after selling all 150 units of Haunted, Spooky's next game (Rob Zombies Spookshow International) had double the units and also sold out, allowing them to build their own shop in 2016. After making some contract games, the company's reputation skyrocketed with the critically acclaimed Total Nuclear Annihilation and Alice Coopers Nightmare Castle. This culminated in the company managing to secure the license to the extremely popular Rick and Morty; once they put their game up for sale, the entire run of 750 units (the largest the company had ever made) sold out within hours.

Games the company has made:

Tropes related to the company itself: