Self Demonstrating / Rick and Morty 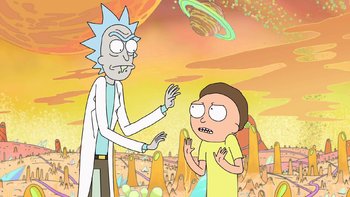 Look, we-we got our own Self Demonstrating page Morty! Oh, um, okay, cool I guess.
Advertisement:

Huh, going classic. Rick, where are you?! Where am I?! Wh-why can I only see letters spelling out the words I'm saying and a picture of us up there?! OH GOD, WHY DID THOSE WORDS JUST TURN BLUE?! C-Calm down, Morty, th-there's - Morty, calm down and - MORTY, CALM DOWN AND CLOSE YOUR *burp* EYES! It's nothing to worry about, Morty - we're just in a *urp* wiki dimension. Whoa, you're gonna be doing a lot of that if you keep this up. Riiiiick, wh-who are you talking to? Nobody important, Morty - just the poor bastard that has to keep writing down the shit coming out of my mouth - yeah, you keep telling yourself that. OK, so from the links being used so far, that means we're at...oh, fuck me, we're at TV Tropes - this is gonna *burp* take awhile... You don't sound too happy, Rick. A-are we somewhere bad? Oh, it's bad, Morty - it's really bad. Ooooooh... So one day a bunch of a-*burp*-assholes decide to take a big shit on the Internet filled with a bunch of descriptions of references they got from movies and TV shows, only it turned really in on itself and the assholes - sorry, "tropers" - even used these references to describe themselves. Oh, jeez Rick, I-I-I don't really know what someone wo-would wanna like...ruin their life doing something stupid like that, I mean, i-i-it sounds kinda dumb honestly, like, uh, why the hell would anyone give a crap about re-occurring elements i-i-in TV shows and stupid shit like that? People are dumb, Morty. See, this guy gets it. The problem is that we're in the s-self demonstrating section, wh-which is like a group of in-joke pages made on the site, to ma-m-make it seem like the ch-*burp* character in question is t-talking to the guy reading it. Oh, uh, Rick that sounds a little lame, honestly. Like, y'know, a bunch of people trying way too hard to be, y'know, funny and write in the characters' voices, but they always just end up exaggerating certain, uh, character tics and make them sound like cheap caricatures of themselves, y'know? Morty, shut the hell up! You don't know shit. You're overthinking it as usual. Be-besides it's too late, there's already someone who-who-who's been reading this page the ent-*burp*-ire time Whoa, Rick, uh, I had no idea that this guy was looking at us this whole time, that seems a little creepy, actually. Morty, just - just shut up. We're text in a goddamn box to those people, alright? Now hold on, I gotta re-*burp*-orient myself here. Oh. OK. (I thought your liver was enough of a compass already, but whatever) Hey, I saw that!

Okay...ugh, we're at the point on the page where we introduce ourselves so the reader gets an idea of what we're about. I'll start. *ahem* Hey there, all you folks and folkers out there! If you don't know who I am or what I do, then you can screw right off and read my Character page, 'cause I'm not gonna stand here in the middle of fucking nowhere and rattle off my life history to the goddamn empty air like an asshole. *burp* Morty, you're up. Oh geez...uh, hey there...you?. N-Nice to meet you, I guess. You're losing 'em, Morty! Just...just talk about the stuff we do when we're not sitting at home with our thumbs up our asses while I direct our attentively-handicapped readers to your Char-*burp* your Char-*burp* your Character page. Oh, yeah! Yeah, so basically we just go to different dimensions...and stuff, with the use of R-Rick's portal gun...and crap. Yeah, thanks for taking an "and crap" all over my life's work, Morty. God...OK, really short: I'm the smartest guy in the fucking MULTIVERSE, but I can't just go off and do stuff on my own, or I'll go nuts. More nuts, whatever. I drag my grandson Morty along here BECAUSE I CAN, and screw around with all different sorts of people in all different sorts of places and blah-blah-blah-blah. Yeah, and the-they get really weird sometimes, like, uh...oh! You remember that place where chairs were people? Ugh...Morty, there's probably, like, a hundred wikis that talk about the number of teeth in our mouths or the number of pimples on Jerry's left ass cheek. We did the stupid thing, now let's move on. Oh, and if you've got a PROBLEM with how this section is ending, I just plowed Your Mom sideways last night, so suck it. You didn't have to go that far, Rick - I'm just saying. Oh, grow a pair, Morty.

Oh, fuck me, there's MORE of this?! You know, maybe they're interested in our family since a lot of times they end up being a part of our adventures? *burp* Yeah, sure, knock yourself out. Okay, great, thanks. OL...so there's my dad Jerry — AKA the human dishrag ...are we really gonna do this now? Anyway, his name is JERRY, he's my dad, and...he's kind of a wimp...an awful lot of the time, but he's got his moments where he does cool stuff, like— Read the character page, boom. Done. Next. *sigh* OK, so then there's my mom Beth— MY DAUGHTER. Uh, yeah. She got married to Jerry— AKA the human trashbag. —and she's smart and a doctor— Animal doctor —and...and go read her character page, I guess. I also have a sister named Summer. Character page. ...fine. Fine! Hey, why do you, me, Mom, and Dad get our own character pages to ourselves, while Summer has to share one with the rest of our family? Because Summer is still seeking popularity, and Jerry is too much of a worthless piece of SHIT… wait he does have a character page now? GODDAMN IT! Aw, man. Can we go home now?! A-almost, Morty. It looks like we have to make it through the list of tropes these people seem to think apply to us.

Oh, and uh... somebody decided to talk like a Mr. Meeseeks and set up a character page dedicated to them. 'Even somehow managed to get their hands on a box for it. That sounds about right - talking like someone whose only reason for existing is to die. Boo-ya!

*burp* So, yeah. Tropes that "apply" to Morty and me include:

There, we're done. Can we go home now, Rick? Huh? O-o-oh, yeah sure Morty. *Rick fires a portal to the wall* Peace out, bitches!

*The portal reappears with Rick emerging from it* Nobody wants to read about you, Jerry!
*Rick grabs Jerry by the arm and pulls him into the portal*