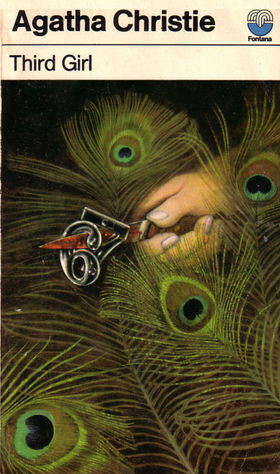 Third Girl is a 1966 novel by Agatha Christie.

Hercule Poirot is enjoying a quiet breakfast when a strange young woman shows up unannounced at his door. The disheveled, nervous young woman says that she was referred to Poirot, and that she may have committed a murder. No sooner has she gotten that out, however, than she takes a second look at Poirot, decides "you're too old", and departs.

Poirot, with his vanity offended and also curious, starts asking around. Luckily, his friend Ariadne Oliver (a mystery writer and Agatha Christie's Author Avatar) knows who she is, because Ariadne was the one who referred the young lady—one Norma Restarick—to Poirot. Poirot then finds out about Norma's whole social circle: her father Andrew Restarick, once estranged from Norma but now returned after a couple decades abroad; Andrew's young wife Mary; Norma's roommates Claudia and Frances; and David Baker, Norma's long-haired hippie boyfriend who comes off as extremely suspicious.

Poirot and Ariadne find all this out, but at the same time Norma herself seems to have disappeared. Where is she? Did she commit a murder?