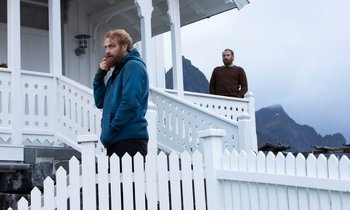 Twin: Rugged scenery and rugged beards!
Twin is a 2019 Nordic Noir drama starring Kristofer Hivju as Erik Moen, a broke beach-bum surfer who lives out of his motor home... and as his twin brother Adam Moen, a successful businessman and family man who runs a guesthouse with his wife Ingrid. The twins have been estranged for 15 years, but when they meet up again, old wounds are reopened and in a vicious fight between the brothers, Erik and Ingrid accidentally cause Adam's death. Fearing she will be charged with murder, Ingrid persuades Erik to stand in for Adam until the police investigation is completed. However, putting on a convincing performance for Adam's family and friends, especially when one of Erik's closest friends is investigating the death, proves to be a tough act.